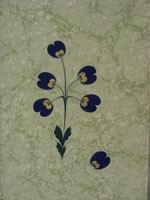 Hussein was born on Shaban 5, 4th Hegira (January 10, 626). He is known by the title of Shaheed. It was narrated that the part of his body below his chest looked just like to his grandfather’s body. When Hussein was born, Prophet Muhammad (pbuh) called adhan (call to prayer) to his ear as he did for his elder brother Hassan. This was not a custom then practiced by the Arabs.

On the seventh day of his birth he also had an aqiqa (sacrifice on occasion of birth) slaughtered, and he told his daughter Fatima to shave his head and give the weight of his hair in silver to the poor. Hussein and his brother Hassan learned qiraat (Quranic recitation) from Abu Abdurrahman as-Sulaim, one of the companions of the Prophet. He narrated eight hadiths (sayings of the Prophet) in total from his grandfather, mother, father, Umar, and other companions.

Like his brother Hassan, Hussein did not actually take an active role in events happening in the periods of the two caliphs. At the time of Uthman, he participated in Said b. As’s campaign from Kufa to Horasan. Together with his brother Hassan, they were assigned by his father Ali to protect Uthman against the rebels surrounding his house and to carry water to his house.

During his father’s caliphate, Hussein went to Qufa and joined in all the campaigns. After his father’s martyrdom, he obeyed his will and submitted to his brother Hassan. However, when Hassan decided to reach an agreement with Muawiya, he wanted to defy but his objection was refused. Then he went to Medina and devoted himself to Islam and carried out all the stipulations of Islam in one's daily life. There is not any narrative in the first Sunni and Shia sources about the claims that people submitted to Hussein as imam (leader) after Hassan’s death or he acted against Muawiya or he did anything for being the leader. On the contrary, it was stated that he did not allow any action toward that purpose. However, it is certain that Hussein changed his positive attitude toward Muawiya after 56 A.H. (676). It was because, like many other Muslims, he was bothered by Muawiya’s forcing people to accept Yazid as their leader.

In the night of 28th of Rajab, 60 A.H. (May 4, 680), Hussein left for Mecca with all his family members, except his half-brother Muhammad b. Hanafiyya, who told him that he was wrong to act at that moment. When people of Kufa learned that Hussein did not submit to Yazid, the notable people like Shabas b. Ribl and Sulaiman b. Surad wrote an invitation letter to him to make him the caliph. They also sent a group led by Abu Abdullah al-Jadali to him. Thereupon, Hussein sent his cousin Muslim b. Aqil to Kufa to learn more about their invitation. Muslim reached Kufa on the 5th of Shawwal, 60 A.H. (July 9, 680) and started to take allegiance in the name of Hussein. It was reported that 12 to 30 thousand people accepted allegiance to him and Muslim made a public speech at the Masjid of Kufa. As soon as Yazid learned about what Muslim was doing, he discharged the governor of Kufa Nu’man b. Bashir al-Ansari and appointed in his place the governor of Basra, Ubaidullah b. Ziyad to Kufa. He ordered Ubaidullah to expel or kill Muslim. Then, Muslim was caught and was killed (8th or 9th Zulhijjah 60 A.H./ September 9 or 10, 680). He had informed Hussein about the oath of allegiance of people of Kufa with a letter, but since he was killed, he could not let him know that they broke their oath.

Since Hussein did not know about the recent events, he decided to depart to Qufa. Individuals like Abdullah b. Umar did not want him to go there. Ibn Abbas asked him not to go there alone at least. After completing his Umrah (minor pilgrimage) on the 8th of Zulhijjah 60 A.H. (September 9, 680), Hussein left for Qufa with his family and his supporters. However, when he learned that people of Qufa broke their oath and Muslim b. Aqil was killled from two travelers he met in Salebiyya he wanted to turn back. But he had to continue the trip upon the insistence of Muslim’s sons and brothers. Meanwhile, he told his supporters that anyone who wished was free to leave. After the departure of some of his supporters, only seventy people stayed with him including his family members. Finally, the group arrived at Karbala in the Nineva region (Muharram 2, 61 A.H./ October 2, 680).

Ubaidullah, the governor of Qufa, ordered his men to hinder the group from sheltering in places appropriate for lodging and to make them camp in a waterless and defenseless area.. Ubaidullah ordered Omar b. Sa‘d b. Abu Vaqqas, the governor of Ray, to attack Hussein and solve the problem. First, Umar ordered Amr b.Hajjaj to close the watercourses to leave Hussein in despair without any reach to the Euphrates. Then, he met with Hussein several times. Although it is not exactly known what they talked with each other, it is anticipated that it was Hussein making these propositions: going back to where he came from, personally going and accepting allegiance of Yazid, or fighting in holy wars in a Muslim frontier. Umar informed Ubaidullah b. Ziyad about Hussein’s offers hoping that one of them would be accepted and he would get free from this tense duty. Even though Ubaidullah approved Hussein’s offer at first, Shamir b. Zuljawshan, who fought in Ali’s side in the Battle of Siffin, reminded him that he would miss an important opportunity. Shamir suggested him either to make Hussein obey his order or to punish him. Thereupon, Ubaidullah sent a letter to Umar with Shamir. In his letter, he ordered Umar to make Hussein surrender himself directly, and if he could not achieve this, he would have to leave the command to Shamir. Shamir arrived to the headquarters on Thursday, the 9th of Muharram. Since he did not want to loose the command, Umar told Shamir that he would fulfill the order. Hussein and his supporters had the entire night in prayer.

The next day Hussein got on his horse after making the necessary preparations for war. Holding Qu'ran in front of him, he approached Umar’s army. He told them that they should understand why he came there and if they gave a fair decision they would reach happiness and would not need to attack them. He also stated that if they did not understand his excuse, they could do what they wanted. Upon Hussein’s speech, Hur b. Yazid regretted what he did and switched to Hussein’s side.

The war began when Umar b. Sa‘d came closer with his flag and shot the first arrow. The forces of the two sides were not equal at all and the war went on as a tragedy. Hussein’s soldiers, at the beginning consisted of 23 cavaliers and 40 foot soldiers, shortly decreased in number. Hussein was leading his soldiers who were already exhausted because of the heat and thirstiness. He was fighting courageously. At the end of the war, Hussein was attacked from all sides on the order of Shamir b. Zuljawshan. Sinan b. Anas al-Nakhai stuck his blade to Hussein and ran him down. He then got off his horse and cut his hair and head. Umar’s soldiers robbed the dead soldiers and ravaged everything there. Meanwhile, they wanted to kill Ali Zayn al-Abidin, Hussein’s son, who was lying sick in his bed but Umar b. Sa‘d did not allow them (Muharram 10, 61/ October 10, 680). The bodies of the martyrs were buried by villagers in Ghadiriyya where people of Banu Asad lived.

When Hussein’s cut-off head and the captives were sent to Damascus, Yazid seemed to be affected and cursed Ubaidullah b. Ziyad for he had killed Hussein. However, it is not possible to say that he was sincere in his sorrow. If he had indeed been affected, he would have laid off Ubaidullah, Shamir, and others. Besides, there are some narratives stating that it was himself who ordered killing of Hussein. Hussein’s son, daughters, his sister and other captives from Banu Taglib were kept in Damascus for a few days, and then sent to Medina with the accompaniment of guards.

The location where Hussein’s head was buried is controversial. There are claims like it was buried in Baqi Graveyard in Medina, next to his father’s grave in Najaf, somewhere outside of Qufa, in the grave where his body was buried in Karbala, an unknown place in Damascus, in Rakka, or in Cairo. The first claim is considered the strongest one among others.

The Shia world who accepts Hussein as the third of imams and fifth of the fourteen imams commemorates Hussein’s martyrdom in Karbala every year with condolence ceremonies. However, fasting of Sunnis in Muharram is not related to Karbala condolences. Hussein’s piteous end led a new form in Islamic literature; Shia poets and writers wrote “maqtel”, long elegies, and reading pieces to be read especially in the condolence ceremonies.

Although Ali was the movement point and the principal character of Shi'sm, the Shia world did not attach much importance to Ali’s being martyred because there was not any strong political foundation behind it. However, they perceived Hussein’s being martyred as a procreating source of Shi'sm and they rendered it as the slogan of Shiaism. Today, especially the emotional and spiritial life of Isnashariyya Imamiyya, the largest minority denomination of Islamic world, was directed by the love for Hussein.

Hussein’s son Ali al-Akbar was martyred in Karbala with him. His descent was not continued by his sons Ja’far and Abdullah but his other son Ali Zayn al-Abidin, and his descendants were known as “sayyid.” He also had two daughter named Fatima and Sakine.

Sources convey that Prophet Muhammad (pbuh) loved his two grandsons very much; he did whatever they wanted, played with them, carried them on his shoulders, When his grandsons climbed on his back while he would bend during ritual prayer, he would leave them up there and stay in that position until they came off. Once, when he saw that Hassan and Hussein came in the masjid while he was preaching in minbar, he stopped his speech and came down. He hugged them and said “Allah was absolutely right when He said ‘The riches and your children may be but a trial.’ (al-Taghabun 64/15). I could not stay when I saw them.” Muslims’ love and compassion for Hassan and Hussein, who were among Ahl-i Bayt (members of the Prophet’s family), continued after the Prophet’s decease as well. For example, during his caliphate, Umar established the council and allocated the same amount of allowance for them with the companions who participated in the war of Badir. Hussein was seen as the trust of the Prophet and he had always been treated with love, compassion, and faithfulness. So he did not feel absence of his grandfather and mother whom he lost when he was six years old. As the beloved grandchildren of the Prophet, Hussein’s and his brother Hassan’s names are the most common names given in Turkey.

Fatima: A Prophet's Daughter who found Consolation in Death

The Views of Orientalists on the Hadith Literature

Orientalist Views of the Prophet Muhammad

Karbala martyrs have been remembered here in Istanbul for centuries

A Few Long Moments in the Prophet’s Mosque