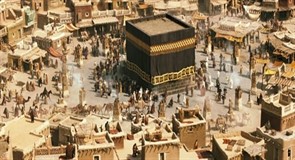 A Majidi Movie under the Shadow of Discussions

Fourteen centuries have passed over the divine call of the last prophet, Muhammad Mustapha (pbuh) - the call that had started in Mecca and invited people to unite around the common ground of monotheism...

Qatar and Iran to make films about the Prophet

The Prophet's life has been depicted in film before, in 'The Message' and animated film 'Muhammad - The Last Prophet'. Now Qatar and Iran aim to bring films depicting the life of the last Prophet into cinemas worldwide.

An East Lancashire teenager has beaten her peers across the world to be shortlisted for a global accolade. Hollins Technology College student Amna Aslam produced a short film ‘Muhammad In Accrington... Inspiring Me’ as part of the Tony Blair Faith Foundation Faith Shorts contest.

Yet Another Anti-Muslim Film: Obsession

Just when the presidential elections were heating up in America this DVD film was distributed to millions of American families. 28 million copies of the film have been used as election material, being distributed in approximately 70 newspapers in what are knownas "swing-states", i.e. those states in which no candidate has overwhelming support.

The momentary shadows cast on the "silver screen" by man's imagination earn the right to be born again in a different time and place by means of the cinema. A shadow cast in Hollywood is born again in Istanbul. Shadows travel inch-by-inch around the world...

Will the Islamic World Produce Another "Message"?

A festival by the name Muslimfest has been held in Canada since 2004. The cinema section of the festival is sending a message to all directors who consider themselves liable to convey the Islamic values to the “global” context by making a movie.

"The Message is a Materialistic Film"

We can say that we are unable to successfully use the cinema not only in the area of religion, but in any area. We are a country that has lived a great rupture in the area of culture.

"Can our Prophet be Depicted?"

Using Abstractions to Depict the Prophet in Cinema