Understanding in Christianity and in the Societies before Islam

In the Politeist Greek, it was believed that owning a remembrance belonging from legendary or hero was accepted highly important especially for protecting a city. Moreover, belongings from hero, ancestor or saint had great religious importance in the Egypt, Celt, China and Indian societies. In the Buddhist societies, remembrances remaining from Kâsyapa, who was a predecessor of Buddha, were protected in the stupas, and they were highly respected. Buddhists believe that Buddha ordered to show respect to his personal belongings as a religious duty. Four teeth, two collarbones and a front bone were considered as “seven big trusts” in Buddhists societies. 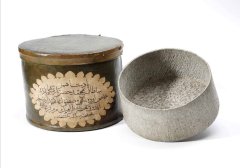 In the Christianity, relics are seen more important compared to all other religious. In the first period of Christianity, it was believed that the soul of saint lives near to his tomb and all of saint’s remaining were protected in his tomb. Some parts of crucifix, on which Jesus was dead and which was found in the Jerusalem in the fourth century, took place in the churches as a holy trust. For the memory of this event, a religious festival was started.

These kinds of remembrance belongings were highly appreciated in order to take attention and to increase the importance of the new built churches in the eyes of the Christian society. Because of this reason, there was nearly no churches, where any holy trust was protected and exhibited. A piece of clothes, a handkerchief or a piece of land from tomb of saint increased the magnitude of the churches in the eyes of local public. Scepter (attributed to MOSES), hair (attributed to NOAH), a piece of wood (accepted the part of NOAH’s ship) and other goods, accepted as holy, took places in the Christian temples.  The blessing of churches with belongings, accepted as holy, was obligated by second İznik Consul. In some churches, these kinds of belonging were put near to door or in a specific place and it was seen that some people kissed the. 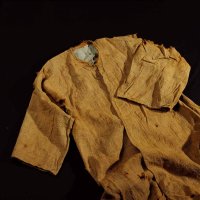 During a trip, an extreme interest to a place, where The Prophet (pbuh) prayed, took the attention of Umar. After that, Umar prohibited to all Muslims such kind of events by explaining that Ahl al-Kitab (The People of Book, i.e., the Jewish and Christians) was perished just because they followed marks remaining from their prophets and they built churches on these marks. And also, some hadiths told by Bukhârî about armor, scepter, sword, glass, seal  of The Prophet (pbuh) and about Hz. Prophet’s belongings used by caliphs shows some important evidence. It shows us that some Muslims hoped for help from water, on which hair of Hz. Prophet was laid. Moreover, some Muslims used water, which was used for cleaning the Hz. Prophet’s clothes that presented near Aisha, in order to cure some illnesses. All of these evidences show us that some companions protected the belongings of The Prophet to hope for help. The companions thought that The Prophet’s shirt could recover their illnesses because they knew miracle experienced by Jacob (who recovered from blindness after he touched his son’s skirt into his eyes.) 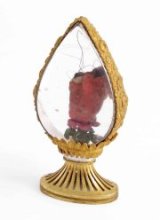 Without a doubt, Umar b. Abd al-Aziz , among Umayyad caliphs, gave the greatest value to the trust of The Prophet (pbuh). Each day, Umar b. Abd al-Aziz looked these thrusts, which were protected in a room, next to the door of Umar b. Abd al-Aziz. He showed these trust to Kurashi visitors and said that “these were the heritage of person, for whom Allah honored you.” These trusts were cedar made from date leaf, leather cushion, a big plate, a water glass, a shirt, a grinder, velvet used probably as a quilt.

There were different rumors about the inheritance of trusts of The Prophet (pbuh) from Umayyads to Abbasids. These different rumors showed that during religious festivals, last Abbasid caliphs wear the cardigan of The Prophet (pbuh), which was given to Ka'b b. al-Zuhair or made a present for Ayla people. Although some historians expressed that the cardigan was passed to Mongols, it was also possible that Abbasids took the cardigan to Egypt. Abbasids showed great attention for protecting holy trusts that were symbols of Abbasid caliphate. Just as Abbasids, Ottomans took holy trusts to Konya in the First World War, then to Niğde during the Second World War.

The holy trusts did not compose of only cardigan, sword and scepter. Other belongings were protected with great respect by Muslim people in the different parts of Islam world. Salahaddin, who was governor of Damascus and Aleppo, sent a little big stirrup of THe Prophet to caliphs Mutasım in 653 and declared that this stirrup was protected by Ayyubids just like Abbasids protected the cardigan of The Prophet (pbuh). The caliph kissed the stirrup and put it near to cardigan and scepter. 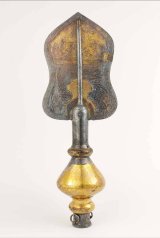 Another place, where there were some belongings of Hz. Prophet, was "Deyr al-Tin" or Rıbat a1-âthâr”, which was built by Bahâeddin Ali b. Muhammed b. Salim b. Hınna, vizier of Sultan Baybars el-Bundukdarî on Kahire. Based on the information given by İbn Battuta, who visited this holy place, there were bowl, fabric used for cleaning of The Prophet (pbuh) and a Koran, which was drawn up by Hz. Ali. The vizier spent huge amount of money to get listed trusts. Based on the information given by Teymur Paşa, a person from Benî Hınna bought this Koran, which was inherited to Benu Abraham from one generation to other, and that person took the Koran to the Egypt. He built a construct, known as " Rıbat a1-âthâr ", in Birketü'l-habeş, south of Kahire and near to River Nile.  Today, this place is known as “Jâmi'u-athar al-Nabî” As it is understood, here there were piece of scepter, stick and comb of The Prophet (pbuh) other than listed trusts. Later, these trusts were transferred to special dome-shaped room in Jamiu'l-Gavrî' by al-Malik a1-Ashraf Kansu Gavri. All of these trusts, including a Koran, whish was attributed Uthma , stayed here more than three decades until 1275 (A.H).  Then they were transferred to Al-Husainî Jamii in a chest with a ceremony.

Another trust, which was attributed to The Prophet (pbuh) was his footprint. (Nakş-ı Kadem-i Sa¬adet). Footprint has great importance almost for all religious. Buddhists attributed a footprint to Buddha, just like Christians did for Jesus. It was also told that there were other footprints, which were attributed to different prophets. Muslim scholars generally do not accept that the footprint of The Prophet (pbuh) did not pass on a Stone although his footprint passed on a  soft sand or on earth. About this subject, Şihabuddin Ahmed b. Ahmed b. Muhammed el-Vefâî el-Acemî wrote a pamphlet, known as "Tenzîhü'l-Mustafa el-Muhtar an mâ lem yesbüt mine'l-ahbar" and tried to show that this rumor was fictitious. And also most of Muslim scholar, including Ibn Hajar and Ibn Taymiyya, do not accept this rumor.

Ahmet Teymur Pahsa expressed that there were seven footprints, which were attributed to The Prophet (pbuh) but no two footprints look like. According to him, four of these prints were in Egypt, one in Jerusalem (Kubbetü's-Sahra), one in Istanbul and the other one is in Taif.

And also, in 1229 Avnurrefık, leader of Mecca, destructed the dome, which was built on the footprint that presented near Zamzam in Mecca and that was attributed to The Prophet (pbuh).

One of the footprints in Mecca was in a small cell near the Mescid-i Eserin-Nebi, other one was in Kayıtbay Turbeh, the third one was Ahmed Redevî Turbeh and finally the last one was in a village of Cîze. Sultan al-Malik a1-Ashraf Abu'n-Nasr bought the footprint, which was in Kayıtbay Turbeh in exchange for 200.000 dinar and requested that the footprint would be put on his tomb. It was rumored that Sultan Ahmet I took this footprint to Istanbul in order to get a copy and turned it back.here is more than one footprint, attributed to The Prophet (pbuh) but it is obvious that these are just copies. Many footprints are highly respected in India, namely in Ahmedabad, Gaur and Delhi. 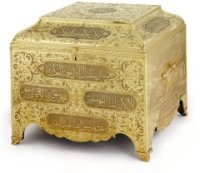 The rumor was not clear about how the holy trusts that are exhibited in Has Oda and which are known as "Emanât-ı Mukaddese" or "Emanât-ı Mubârakah" was transferred to Istanbul. For some people, After Yavuz Sultan Selim conquered Egypt, Berekât, leader of Mecca, sent his son, Ebu Numey, to Yavuz Sultan Selim in order to deliver the keys of Mecca and Medina with Emanât-ı Mubârakah. After that, these trusts were sent by ships to Istanbul. According to historian İsmail Hami Danişmend, Ebu Numey was accepted by Yavuz Sultan Selim on Monday on 6 July 1517. Ibn İlyas, without giving much detail, declared that this date was Sunday, not Monday but he declared the son of Berekât gave valuable gifts to Yavuz Sultan. 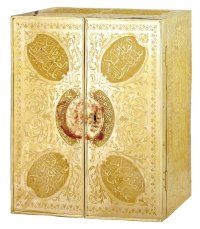 There is not definite information about which holy trusts were given by Ebu Numey. Based on the information given by Evliya Çelebi, the majority of the holy trust were taken in İskebderiye Harbor. Gavri made a small fleet with a huge amount of treasury, which was named by Evliya Çelebi as the treasury of Croesus, waited in İskenderiye Harbor in order to run away to Maghrib. Yavuz Sultan Selim got the treasury of Gavri when Ottoman fleet wrapped İskenderiye Harbor. The Emanat-ı Mubarakah composed of these materials: A red flag, on which there was a lion figure and a writing of "nasru'n-minallah" (help from Allah), a broken tooth of The Prophet (pbuh) in Uhud War, a piece of beard of The Prophet (pbuh), an ewer used to get  wudu, tesbih from sanabnı tree, a scepter, paypuş-u şerif, two set cardigan (hırka-i şerif), a black sword, sash made from camel wool… 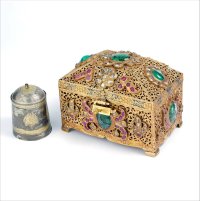 These trusts were winded with bundles that were embroidered with gold, and it was written on the bundles that "Hazâ muhallefâtü Rasulillah" Evliya Çelebi declares that Yavuz Sultan Selim stamped with a seal after he kissed and smeared bundles to his eyes and face. In addition these holy trusts, a turban, a knife and a sundial of the prophet Joseph, swords of four Caliphs and thousands of swords and shield were taken to Istanbul. The fact that The Prophet (pbuh) did not use tesbih and that some holy trusts listed above do not exist today, made impossible to accept all rumor made by Evliya Çelebi. Maqrizî in his book, Kitabu’z-zehâir, pointed out that Zülfikâr, Samsame, the sword of Husain and Jafar al-Sadık, and shield of Hamza were taken a place in Egypt Weapon Treasury and later these weapons were divided among ten people, who rebelled against el-Mustansır but he did not talk about the swords of four caliphs. We do not have information about the flag, about which Evliya Çelebi told but it was rumored that Sancak-ı Şerif from holy trusts were taken from Egypt in Kanuni’s time. It was fact and obvious that some belongings attributed to The Prophet (pbuh) or the companions, keys of Kaabah, prevention of al-Hajar  al-Aswad were all transported to Istanbul. For example, it was pointed out in the Şehrişahname, which was published by Seyyid Lokman and which was probably miniatured by Nakkaş Osman and also in Zübdetü't-tevârih, which the sword (The Prophet (pbuh) used in Uhud War, later he made a present to Umar and Umayyads and Abbasids got) was given to Sutan II. Murad as a gift by Süleyman Baybars. 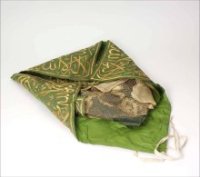 As a conclusion, we do not get accurate information about which one of Emânât-ı Mukaddese was obtained by Ebu Nümey, or which one was taken from Egypt or from another place.

History of the Sacred Trusts

Relics of Prophet Muhammad to be displayed during Ramadan

The Real Meaning of the Relics of Muhammad