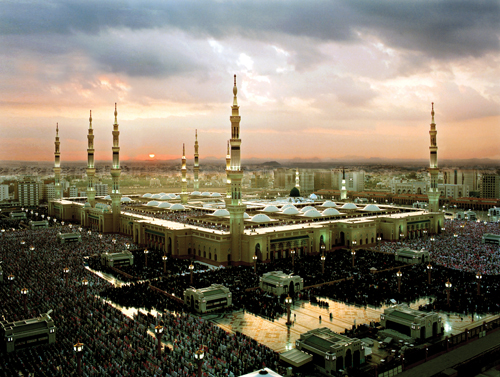 Construction of the Mosque

When the Prophet emigrated from Makka to Madina, one of the first things he did was to construct a mosque there. One of the first buildings ever constructed by the Prophet himself, the Mosque of the Prophet was always at the center of all the Prophet’s activities in Madina. At the same time, it has served as an example to most subsequent mosques and masjids built in Islamic architectural history. Though simple and sober, this first mosque was constructed so as to be extremely functional. Also, according to generally accepted view of Islamic scholars, the Mosque of the Prophet is one of the three holiest mosques in Islam.

The area where the Prophet’s camel had settled during the Hejira (his migration) was purchased from its owners. After the ground was laid out, the construction started in the month of Rabi’ul-awwal (September 622 AD), when the Prophet located the first stone into the foundation, which was about 3 yards deep. The construction took approximately 8 months, and was completed in the month of Shawwal (April 623). The main building was built on stone foundation, and its walls were made up of single-row adobes. It covered an area of 60x70 zir’a (1022 sq.m, a zira-ı mimarc was an Arabic term of measurement which in Ottoman times approximated 75.8 cm ~= 2.46 feet ~= 0.82 yards); the side walls were about the height of a man, and it had three entrances and no ceilings. Its Qibla was determined by the Prophet in the direction of Jerusalem. To this main portion, two rooms were added by the Prophet for his wives Aisha and Sawda; later seven more rooms were built adjacent to the mosque. (1)

Restoration and Expansion of the Mosque (2)

With all restorations, the border of the Mosque’s Qibla wall has been kept unchanged as was built by the Prophet himself, except for some minor repairs and renovations. Major restoration projects can be described, in chronological order, as follows:

Sections of the Mosque

The Hujra al-Sadah: When the Prophet died and was buried in his wife Aisha’s room, this room was called the Hujra al-Saadah. Every renovation project in the mosque has been started from this room, which was built together with the mosque itself and made up of adobe on a stone foundation. The other rooms were added during renovations at the time of the Umayyad caliph Walid. The Hujra was further renovated by Caliph Omar ibn Abdulaziz who employed Byzantine and Coptic experts by adding the Hujra of Fatima to the north into the main Hujra al-Saadah, and by covering it with a small dome. In reign of Zangis, the tomb was completely covered by marble by Wazeer Jamaluddin Muhammad ibn Ali al-Isfahani. Sultan Kalavun covered the dome of the Hujra al-Saadah with lead, which had been covered with a canopy. When the Hujra al-Saadah was ruined by a fire in 881 (1476), it was re-built of stone completely. During Ottoman times, Sultan Ahmed I sent silver gridirons covered with gold to the Hujra al-Saadah; Sutan Mahmud II built the current dome and painted it in green, and covered the outer wall of it with chinas. Later Sultan Abdulmecid replaced those chinas with more valuable ones. (3) This sacred place has been attached to the Prophet’s minbar and thus made the most important part of the mosque.

The Minbar: When addressing the people in the mosque, the Prophet used to lean on large wood block of date tree. Later, when some difficulties arose in terms of people hearing and seeing the Prophet, a minbar made up of tamarisk, which was one-meter high with the dimensions of 50 x125 cm and a three-stair ladder located on three columns behind, was built in the year 7 (628) or 8 (629). First caliphs did not use the third stair, due to respect for the Prophet, and covered it with a piece of wood. In the time of the third caliph, Othman, a dome was placed on top of the minbar, which was covered with a fabric, and the stairs were covered with ebony. Muawiya ibn Abû Süfyan added six more stairs to the minbar. This first minbar was used until 654 (1256), when it was ruined by a fire; a new minbar was placed which was sent by the king of Yemen, al-Malik al-Muzaffar Shamsuddin in 656 (1258). After this, the minbar was either replaced or removed in 666 (1268) by Sultan Baybars I, in 797 (1395) by the Mamluki Sultan Barkuk, and in 820 (1417) by another Mamluki Sultan Sheikh al-Mahmudi. In 886 (1481) the minbar was once more ruined by a fire, and a new minbar made up of brick plaster was built, which was later replaced by a marble minbar sent by Sultan Kayitbay in 888 (1483). This minbar was re-located to the Quba masjid in 998 (1590) when the Ottoman Sultan Murad III sent a marble minbar manufactured and ornamented in Istanbul, to replace it. This last minbar still stands in the Mosque of the Prophet today. (4)

The Mihrab: When the Masjid al-Nabawi was first built, there was no mihrab in it, as the place where the Prophet was leading prayers was already known by the people. In the reign of Omar ibn Abdulaziz, however, s small niche was added to the front wall of the mosque when it was re-constructed. Since then there has been only one mihrab in the Masjid al-Nabawi. Throughout time, however, renovations and reconstructions have been made in mihrab, as in other parts of the mosque. The mihrab that was reconstructed with black-and-white and colored marble, decorated by geometric motifs and medallion- and stripe-shaped calligraphies in the jali-sulus styl, had been in place for centuries until 1984, when it finally got its current form.

In addition to this main mihrab, there are also other niches outside the Masjid al-Nabawi that function as markers/indicators. For instance, among these included are the mihrab al-tahajjud built where the Prophet used to pray the tahajjud prayer at night; the mihrab Othman built where Othman the Companion used to pray; the mihrab Fatima which is similar to that of the Prophet built behind the Hujra al-Saadah. In addition to these, there other mihrabs built for different madhabs in the Masjid al-Nabawi. (5)

The minarets: When the Masjid al-Nabawi was first built, Bilal al-Habeshi used to climb up to a place to the qibla side, which was called ustuvanah, and give adhan (prayer call) there. It can be argued that this place, which was in cylinder shape, may have been an inspiration for minarets built subsequently.

The first Caliph to undertake major reconstruction projects in Madina, Omar ibn Abdulaziz, constructed four minarets when expanding and renovating the mosque. These minarets were 26 m high placed on a base of 8x8 zir’a dimensions. In the year 97 (716) Suleyman ibn Abdulmalik removed the upper portion of the minaret on the south-west corner for it was violating the privacy of someone’s home. The mosque remained with three minarets for centuries until 706 (1306-7) when Muhammad ibn Kalavun added another one called the Bab al-Salam minaret. This minaret was later renovated by the Ottoman Sultan Mehmed IV.

When the Masjid al-Nabawi was completely ruined as a result of a major thunderbolt in 13 Ramadan 886 (5 November 1481), all four minarets were re-built together with other parts of the mosque. The minaret on the south-east corner, which is decorated by subtle and most beautiful examples of the Mamluki art, still stands today. Since the head muadhdhin gives adhan in this minaret, it is called Raisiyya. Other minarets that were built by Sultans Suleyman the Magnificient and Abdulmecid were in the Ottoman architectural style and survived until the first expansion project under the Saudi dynasty. In the first Saudi expansion project, there were six minarets; their number reached ten with the major renovation project in 1994. These new minarets are 104 m. high and have 4 sharafas (balconies) each. The bottom portion of these minarets are square-shaped, the middle part octagonal, and upper portion cylindrical. (6)

Some notes on the Prophet's Mosque

I would like to extend the knowledge and would like to let you know that i've found a place where you can find even more details about " Masjid Al Nabwi " and its historical perspective in detail.

The Qur'anic Verses in Masjid al-Haram and Masjid al-Nabawi