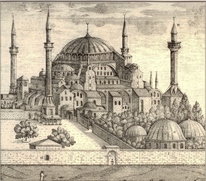 Holding an important place in the life of Muslims, mosques are places that bring people of every age and social strata together, enable them to gain the consciousness of servanthood to God, and allow them to perform worship in a proper manner according to correct religious knowledge that has been purified from false beliefs and superstitions.

Benefiting greatly from the mosque and congregation during the time of the Prophet Muhammad, women developed other mosque-congregation arrangements with the expansion of Islamic lands and the increase in Muslim population. While almost every task related to social life was done in the mosque during the early period, the function of the mosque was limited to worship with the development of society and the formation of institutions. (1) In addition, in a society where the dervish lodge culture was very widespread and active, the doors of mosques are no longer wide open as they were during the early period.

In our social formation the mosque-women practice pertains more to holy days. Kandil (holy night) celebrations and tarawih prayer during the month of Ramadan are times when women are found most in mosques. Just as this is the situation in cities, it is the same in villages. As a matter of fact, mosque visits to be made in our country's villages will show that the place of women in the mosque is the upper balcony which has a clear view of the congregation. This practice reflects the traditional social arrangement of the mosque-women relationship. In this sense, women are not outside the mosque or in closed rooms under it, but especially in the center of it. Together with this, it is a fact that gradually the distance has increased between women and the mosque.

The mosque-women relationship in the city is on a higher level. Women are frequenters of the city mosques both at regular prayer times and during Ramadan and on other holy days. The scheduling of daily life according to the religious calendar and worship is reason for practice and participation pertaining to holy days passing with great enthusiasm. In one sense, individual and social joy, enthusiasm, participation and transfer are made via worship and holy days. Particular to Istanbul, the practice of preparing for the month of Ramadan is as follows: First, tawba or repentance; in other words, the physical and mental preparation of becoming purified from sin. "Jumaada awwal / big repentance, Jumaada thani / small repentance and the three consecutive holy months begin. Rajab, Shaban, Ramadan.... (2) In keeping with the Sunnah, a little fasting is done during the month of Rajab, but most is left for Shaban, because the guiding Prophet did it that way. Intimate with fasting, the body and heart are ready for Ramadan. In order for Ramadan to be meaningful, worship and servanthood are raised to the highest level. Ramadan is the month when mercy and compassion become rivers and flow in abundance. Care is taken to wash in this sea of mercy. In fact, care is taken not only to wash, but to become submerged in it. The final ten days of Ramadan are spent in spiritual retreat in accordance to the sunnah. Worship is made together with the earth and sky. There is only the Creator and His servant. Pleading is made to Allah. Gratitude is given by abandoning the world. In a sense, this world is abandoned and one becomes a guest of the next world. Giving a respite to this world, the servant sets out to contemplate the Lord's treasuries in the other realms. When the body and provisions become light, this is not difficult and there is light upon light. Kandils are times when this religious flourishing embraces the whole society. Kandils pass like semi-holidays for the people of Istanbul. (3)

Today there have been significant changes in practices related to the kandils and Ramadan. Even though women perform their regular prayers in central mosques in the city, modernization has made the mosque-women relationship regress even more. In mosques far removed from the traditional understanding and examples, women pray in a room under the mosque or behind it far from a view of the congregation. We can say that the structure of modernization that keeps religion outside has been influential here. Its being situated in the private space of religion and worship has normalized women not being seen in religious spaces.

In recent years different practices are seen in the celebration of holy days. Mawlid programs in the media and iftar tents and celebrations in culture centers during Ramadan are just a few examples. Women's mosque-Ramadan practice is continuing in the form of making the tarawih prayer and following Mawlid programs. A natural result of this enrichment is an increase of visits to mosques on religious holy days. While mostly female visitors from inside and outside the city continue every day during Ramadan, week-end visits are even heavier and are expanding in a way that includes both sexes. In recent years it has also been seen that mosque visits begin during the three consecutive holy months.

In conclusion, we can say that today holy days and the month of Ramadan make a positive contribution to mosque-women activities. The process is following a positive path towards the development of the opportunity for women to make the Friday prayer and the Eid prayer in the mosque.

1. In time when other spaces were made for work other than worship, the mosques became a space for worship only. Ramazan Altınay, Emevilerde Günlük Yaşam (Daily Life of the Omayyads), Ankara Okulu publications, Ankara 2006 b1, p. 137.

2. In preparation for the most sacred month in Muslim Istanbul. Şennur Sezer- Adnan Özyalçiner, Bir Zamanların İstanbulu (Once Upon a Time in Istanbul), Inkilap pub., 2005, p. 268.

3. Greetings on the kandils would begin at home on the evening of the holy day and continue for almost a week, especially for women. It was a tradition to fast that day, to make halwa or lokma and distribute it to the neighbors. On kandil evenings the mawlid poem was recited at the saladdin mosques. Special ceremonies were held at the takka or dervish lodges. Ibid.

The historical depth in the back ground of Muslim women

Violence Against Women is Betrayal to Islam

Women Retake Islam: The Prophet -- And My Mother -- Would Be Proud

The Prophet and Women