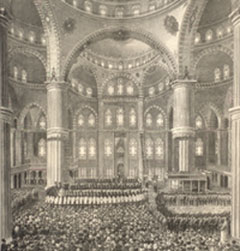 Mawlid in the Blue Mosque

There is no definite information about how the ceremonies that were organized to celebrate Prophet Muhammad's birthday, or Mawlid, which is generally accepted as falling on 12 Rabi’ al-Awwal, started in the official Ottoman protocol.  The general opinion, arrived at by working from the records of some waqfs (charitable foundations) is that the celebration of this occasion in the Ottomans dates back as far as Osman Gazi; in the reign of Suleyman the Magnificent such celebrations became part of the palace protocol and had been completely officialized by the reign of Murad III.

It is possible to split the Mawlid ceremonies into two, those held in the palaces, mansions and houses, and the ceremonial parades that the sultan participated in, which were known as the Mawlid Parades; these parades would convene in one of the Sultan's mosques. It is known that the ceremonies that started at Topkapı Palace would sometimes take place in the Ağalar Mosque, and later they were held in the Blue Mosque, or the Valide Sultan Mosque in Eminonu, Eyup Sultan Mosque, Beyazit Mosque, Nusretiye Mosque or Yildiz Mosque. Before the day of the Mawlid, invitations would be sent to important members of society; the invitations would inform them in which mosque they were to present themselves, ensuring that all took their places in their ceremonial gowns at the required hour. In the Ottoman ceremony the sultan, the ceremonial officials and guards would all participate; they would follow a predetermined route from the palace, and proceed to the mosque where the Mawlid was to be read; this was what was originally known as the Mawlid Parade. However, this term over time took on a wider meaning and came to encapsulate all the ceremonies that were held in the palaces and the mosques on the 12th day of Rabi’ al-Awwal.

When the Mawlid Parade had approached the mosque the person reciting the Call to Prayer would begin to read the Qur’anic chapter entitled The Victory (Al-Fath), and when he had finished a small window would be opened in the royal gallery to indicate that the sultan had arrived and the congregation would rise to their feet and bow in respect. After the official known as the muarrif had read the ta'rif that describes the physical characteristics of the Prophet, the preacher of the Haghia Sofia and Blue Mosque would go to the pulpit, followed by the preacher of the mosque in which they were gathered; each would read a sermon. After each preacher had descended from the pulpit they would be presented with gifts, including an otter fur or a ceremonial cloak. In addition, as each preacher approached the pulpit sherbet and incense was distributed among the congregation. Then the Mawlid of Süleyman Çelebi would be read; after the reader of the first section had finished and descended from the pulpit he was dressed in a ceremonial cloak. As the second reader began to read the lines "Geldi bir ak kuş kanadıyla revan / Arkamı sığadı kuvvetle heman", every one would stand in respect. At this juncture the müjdecibaşı (1) would put the letter that had been sent by the emir of Mecca in front of the grand vizier and at a gesture from the grand vizier the chief clerk would take it and go with the mujdecibaşı into the sultan's presence. The chief eunuch would take the letter out of its pouch and give it back to the mujdecibaşı, who would read it. Later, the chief eunuch, who was the royal minister, put a ceremonial cloak on the chief clerk and mujdecibaşı. Then the sultan would send some of the dates that had arrived from Medina to the grand vizier via the peşkir aga; he would take some and after giving a few to the Shayk al-Islam, the grand vizier would distribute the rest to the viziers and the other statesmen present; when this was finished a tip would be given to the peşkir aga.

When the second reader had finished reading and stepped down from the pulpit he would receive a cloak and presents, and the third reader would take his place. At this point plates of sweets would be placed in front of the grand vizier, the administrator of the Blue Mosque, the Shayk al-Islam, the administrator of the Haghia Sofia mosque and the administrators of other charitable foundations, viziers, minister of finance, the nişancı (2) and other important statesmen and scholars. After the third reader had finished he would lead the Mawlid prayer and then he also descended from the pulpit and was given gifts and a ceremonial cloak, and thus the ceremony came to a close. The grand vizier and high-ranking state officials then left the mosque and mounted their horses in front of the place where ablutions are made, waiting to greet the sultan. The sultan would pass by these men on their horses and accompanied by applause would return to the palace with the Mawlid parade, back down the road they came. The grand vizier and the Shayk al-Islam and other important statesmen would then hold ceremonies on a smaller scale in their own households.

1. Official communicating to the sultan the glad tidings of the departure and arrival to and from Makka of the surre alayı (caravan taking gifts from the Ottoman sultan to Makka).

2. The officer whose duty it was to inscribe the sultan's imperial monogram on all imperial edicts.

How Are We to Realize the Mawlid?

The Place of the Mawlid in Islam

A Decision Between Two Paths