What is the Call to Prayer? Abdurrahman Çetin, Prof. Dr.

Although prayer was made compulsory in the Meccan period, Prophet Muhammad (pbuh) did not feel the need to come up with a way to inform the congregation of the time of prayer until his arrival in Medina. At the beginning of the Medinan period the Muslims would occasionally gather in one place to keep track of the times of the prayer. For a while there would be a cry in the streets of "es-salah es-salah" (the prayer, the prayer) at the time of prayer, this was not enough. It was obvious that there was a need for some sign to inform people that the time to pray had arrived. For this reason a variety of ideas were suggested: hitting a nakus (a piece of wood that would make a noise when hit with a stick; what the Christians used before they had church bells), blowing a horn, lighting a fire or erecting a flag. However, the nakus was used by the Christians, the horn by the Jews, the fire by the Magians, and therefore these were not accepted by the Prophet. However, at this juncture one of the Companions Abdullah b. Zaid b. Sa'laba learned the adhan in a dream and he told the Prophet about this on the following day. Then Prophet Muhammad ordered Bilal to recite the phrases of the adhan twice, and that of the iqama (4) once for the other prayers. At this point Umar came and told the Prophet that he had had the same dream. (5)

Bilal climbed onto a high roof and read the first adhan for the morning prayer.(6) Thus the adhan became official in the 1styear after the emigration (622), or according to another report, in the 2nd year (623). Later, a special place would be built to recite the adhan behind the Masjid-i Nabawi.

The adhan was legitimized through the sunnah (practices of the Prophet) and confirmed in the following verses of the Quran "When ye proclaim your call to prayer, they take it (but) as mockery and sport" (7 and "O ye who believe! When the call is proclaimed to prayer on Friday (the Day of Assembly) hasten earnestly to the Remembrance of God and leave off business (and traffic)." (8) 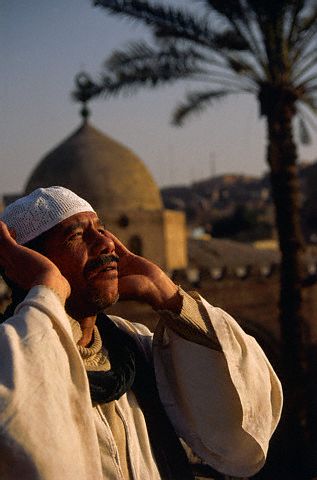 The words to the adhan are as follows:

"Ashadu an la ilaha illallah"
(I witness that there is no god but Allah - twice);

"Ashadu anna Muhammadar Rasullullah
(I witness that Muhammd is His messenger - twice);

"La ilaha illallah"
(There is no god but Allah).


In the morning prayer, after "Hayya ala'l-falah" the muezzin recites "as-Salatu hayrum mina'n nawm" (prayer is more blessed than sleep) twice, and this is known as the taswib.

As far as meaning and content are concerned the adhan is a call both to prayer and to Islam. That is, the adhan calls people to prayer while it expounds the three fundamental principles of Islam: the fact that Allah exists and is one, that Prophet Muhammad is His prophet and that the genuine salvation (falah) is in the other world. The earth is constantly orbiting and turning around the sun and that wherever Muslims reside the prayer is called five times a day, therefore, there is a continual call to prayer throughout the world, and this divine message is being called at every moment somewhere in the world. Many of the hadiths express the significance and importance of the adhan and state the blessings inherent in reciting the adhan. (9)

The adhan is recited for compulsory prayers. If the adhan that is recited from the minarets of the mosque has been heard a separate adhan is not read for the prayer to be performed in the home. If a person is far from the mosque and cannot hear the adhan or is outside a settled area, then the adhan is recited. Adhan is not recited for funeral prayers, witr prayer, the ‘Eid prayers, tarawih prayers, prayers for rain or other non-compulsory prayers. For the congregational prayers that are not compulsory ones, for example, prayers for eclipses or other such prayers, the adhan is not recited. Rather Muslims are summoned by the call "as-Salata (es-salatu) camiatan" (come for the congregational prayer).(10)

The muezzin's voice should be strong and pleasant, and the adhan is recited while standing from a high area; it is recited slowly so that those listening can hear the repeats. To make one's voice stronger the index fingers are brought to the ear lobe and the hands are placed on the ears. The muezzin turns in the direction of the qibla. When he recites "Hayya ala's-salah" he turns his face to the right and when he says "Hayya ala'l falah" he turns his face to the left.

A Muslim who hears the adhan repeats the words of the muezzin after him. However after "Hayya ala's salah" and "Hayya ala'l falah" the listener says "La hawla wala kuwwe illah billah"(all changes, all power and action are possible with Allah's will). The sentence added to the morning adhan "as-salatu hayrum mina'n- nawm" has the response "Sadakta wa barirta"(you have spoken what is right and the truth).

When the adhan has finished the following prayer (which was taught to us by Prophet Muhammad and which is a means of intercession) is recited; "AAllahumma Rabba hadhihi-d-da' watit-tammah was-salatil qa'imah, ati Muhammadan al-wasilata wal-fadilata, wab' athhu maqaman mahmudan-il-ladhi wa' adtah" or "O Allah, my lord who issues this wonderful invitation and eternal call (or the prayer to be preformed" Bestow all means for Muhammad to be closer, bless him with blessings and raise him to the proud place promised in the Quran" (Bukhari "Adhan" 81)

4. The words of the iqama are the same as the adhan, but qad qāma tis-salaat (stand for prayer) is said after `Hayya ala`l-falah`. The iqama is recited before the start of compulsory prayers.

What is the Call to Prayer?

A Call to Mankind

Last Sermon delivered to all fifty US states

Have you ever heard the Call to Prayer?