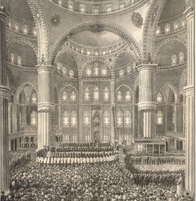 The tarawih prayer, one of the few supererogatory prayers that can be prayed with a congregation, has an important function in respect to enabling individuals to get to know one another, to draw closer to one another and to become reconciled. When the tarawih is performed together, Muslims are better able to comprehend their distinct identity and it allows them to feel unity with their Muslim brothers and sisters. It strengthens family, friendship and neighborly ties.

The word tarawih is the plural form of "tarwiha" which means sitting or resting, and it is the name of "the prayer exclusive to Ramadan that can be performed singly or in a congregation." It is called "tarawih" because after each four cycles or units of prayer remembrance (dhikr) is made or salutations to the Prophet Muhammad are recited which, in a sense, makes for a short period of rest and relaxes the soul.

With the Prophet Muhammad's statement, "Allah made Ramadan fasting compulsory for you; I have made the night prayer (tarawih) sunnah for you" (Ibn Mace, Ikamatu's, Salah, 173; Ibn Hanbel, I, 191), the tarawih prayer took its place among binding sunnahs and became a clear characteristic of Ramadan evenings. A servant who shows obedience to his Lord during the day by fasting strives to grow closer to Allah and seek forgiveness from Him at night by means of the tarawih.

The Prophet indicated that night prayer was the custom of pious persons who lived before the Islamic community, and that it drew people closer to God and protected them from sin.

The Prophet indicated that night prayer was the custom of pious persons who lived before the Islamic community, and that it drew people closer to God and protected them from sin. He stated, "Whoever lives Ramadan believing in it and expecting recompense from Allah will have his past sins forgiven" (Bukhari, Iman, 25, 27; Muslim, Musafirin, 173, 176; Ibn Mace, Ikamatu's-salah, 173; Tirmidhi, Sawm, 83). Islamic scholars have indicated that it is possible to fully experience Ramadan by fasting during the day and praying the tarawih at night (Nawawi, al-Minhaj, VI, 39).

"I see how eager you are to make the tarawih prayer with the congregation. There was no obstacle preventing me from leading you in prayer. However, I did not do it because I feared that you would see the tarawih prayer as compulsory" (Bukhari, Tahaccud, 57). This hadith is one of the traditions that describe Ramadan nights to us during the time of the Sahaba. It shows us how eager the first generation of Muslims was to worship with the Prophet, their devotion to the Sunnah and the Prophet's love and compassion for the believers.

Giving importance to night prayers and not neglecting them, the Prophet was even more careful about this matter in Ramadan; he made his recitation longer on the nights of Ramadan.

Giving importance to night prayers and not neglecting them, the Prophet was even more careful about this matter in Ramadan; he made his recitation longer on the nights of Ramadan. In fact, Huzayfa who prayed with the Prophet reported that he recited the Baqara, Ali Imran and Nisa Qur’anic chapters during the standing position in prayer (Ahmed b. Hanbal, V, 400). Abu Dharr's report that the Prophet sometimes led the Companions in prayer for one-third of the night towards the end of Ramadan shows how much attention he gave this matter particularly during the last ten days of Ramadan.

Caliph Umar saw a group of Companions praying behind Ubayy b. K'ab during the month of Ramadan and said with approval, "You are doing the right thing and what a beautiful thing it is." Just as this event shows the legitimacy of praying the tarawih prayer behind an imam with a good recitation, it also shows that Muslims were praised for collectively performing prayer to Allah during these days.

It is possible for Muslims to know the worth of every second of these golden days - as the Prophet Muhammad said in his words and deeds - by fasting during the day and performing other worship at night. Fasting and the tarawih prayer are an inseparable duo. The practice of performing the tarawih prayer with a full recitation of the Quran during Ramadan first began during Umar's time. A Muslim's listening to the full Quran and refreshing and completing his knowledge during the tarawih prayer has always attracted attention throughout Islamic history. Our responsibility is to grasp the importance of this prayer in this beautiful month and embrace this act of worship.