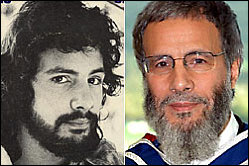 There are great people whose lives are divided into periods, and we find that these people have different characteristics in each period. Their lives are stormy, but in the end, they drop anchor in a safe harbor. However, their lives are a continuous process and evolution. This is what makes them great. Yusuf Islam is one such person.

I first saw Yusuf Islam in Istanbul. The date was 1986. I saw him in the Tepebaşı Casino where he had come to tell his Turkish Muslim brothers why he had become a Muslim. That night Tepebaşı Casino hosted men wearing turbans and frocks, university students wearing ties, women wearing burqas and young girls wearing headscarves. They were about to listen to a man who had been one of the leading pop signers in the 60s and 70s.

I was one of the students wearing ties. Yusuf Islam did not sing songs but recited the Holy Quran that night. His perception, and that of his audience, is that the songs are the symbol of Cat Stevens, but the Holy Quran is the symbol of Yusuf Islam. He considers his songs, compositions and the guitar as things that no longer have anything to do with his life. He would even sing hymns. All who were there were happy with this. This leading pop singer was standing in front of them and he was cursing the thing that had made him so popular. The Muslims still had this thought in mind as they left the casino. The question "Is music a cursed thing?" never entered their minds, because the enthusiasm had been so great.

Our next meeting was in his hometown. He was making a speech at the University of London. He was the guest of the Muslim Students Union. I, again, was among the students wearing ties. The majority of the audience was Muslim, but there were also students who belonged to other religions. They had become because Yusuf Islam was a legend and there were many young Englishmen who had chosen the right way in his wake. The Muslim youngsters were puzzled. The atmosphere was different to that at the Tepebaşı Casino. A young girl said, "Why don't you play music any more? You can do it for Islam." The answer was very bitter. The young girl tried to say "But in the time of the Holy Prophet..." However, there was no need for a second question: "This is my way and Islam requires this!" was the final answer. The date was 1989 and I had made up my mind. This was the First Yusuf. After that, I waited for the second and third Yusuf to appear.

I waited because I had understood him. There must be reason other than the religion to explain why he avoided music. He was escaping not the music, but his past. He was always tense when people asked about his music. There can be no doubt that this was because the music reminded him of Cat Stevens. He was afraid to go back. He was determined not to give himself the opportunity to go back. That may have been the reason behind his different clothing style. His new clothing style was a symbol that enabled his new identity to be accepted by other people. However, the long white loose robe and turban became an instrument that helped Yusuf Islam to accept his new identity.

I finally understood his state of mind. I had learned that those who made the roughest transformation were those who were most afraid of returning to the past. I had come to the conclusion: "He will change as he overcomes the fear of returning to the past." Yusuf Islam would then realize that this way was not Islam. In time he would understand that he had chosen only one of the regional and historical interpretations. This is because what defined Yusuf during this period was not Islam, but himself.

The second Yusuf arrived in the 1990s. He decided that he would use music for the sake of the religion. Now there were no more contradictions concerning his music. He made an album that taught the Quranic alphabet with music. Then his albums of hymns came on the market. He also visited Turkey a couple of times to promote these best-selling albums. The Turkish Muslims snatched up his album even though they did not understand it, yet nothing had changed for the Muslims in Turkey. This was because they had also listened to the songs of Cat Stevens without understanding them. However, many things had changed for Yusuf Islam. The second Yusuf was not the man of haram (those things prohibited in Islam)anymore. He had also discovered the mubah (things that the religion allows people to choose between). He had perceived that life did not merely consist of haram and halal. He had overcome the strict Islamic interpretation which was imposed on him by certain Muslims who had surrounded him in London.

By the year 2000, 20 years had passed since he had become Muslim. The rebellious son whom he described in his song "Father and Son" remained in the past. He was now a "father" and the fathers cannot turn back. He had calmed down and he no longer cared that his past was beckoning. The voice of the past was too far away. He did not care about the fact that his songs were still "hits" in England. He had faith in himself.

The third Yusuf was now ready to emerge and he did. In March 22, 2000 Yusuf Islam visited the English House of Lords. He addressed the Lords and told them that the young people needed an alternative to pop music and that they should be allowed to preserve the moral values. He experienced a feeling of nostalgia in October 20, 2003 when giving a concert on the behalf of charity associations at the Royal Albert Hall. Two days later he was in Hamburg waiting to receive the "World Social Award". The first Yusuf, who did not like being photographed, was now waving his hand at the cameras in Hamburg. Knowing that nothing could harm his Muslim faith, he took the stage in November 29, 2003 in concerts in South Africa organized by Nelson Mandela. It had been a long time since we saw him in a jacket and trousers. Moreover, there was now a picture of Cat Stevens on his website (www.yusufislam.org.uk). Cat Stevens appeared once on the website, however there were three Yusufs; in addition there was Islam, which remained as "one"... And the third Yusuf had found this.