The Lens of Islam: An Interview with Peter Sanders 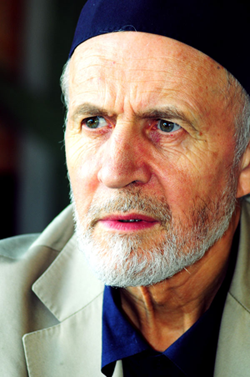 In the first edition of The 500 Most Influential Muslims published in 2009 by Georgetown University's The Prince Alwaleed Bin Talaal Center for Muslim-Christian Understanding and The Royal Islamic Strategic Studies Centre, Peter Sanders is described as “a notable photographer and convert to Islam. He was granted exclusive privileges to photograph Hajj pilgrimage rituals in 1971, and subsequently has become an influential figure in photography as author of In the Shade of the Tree, A Visit to A Prophet, and other books that display his exploration of the Muslim world.”

Peter’s career in photography began in the mid-1960’s, photographing legendary rock bands and music icons. After a journey to India in search for a higher power, Peter’s work took on a new persona. Not only did he photograph the rituals of Hajj at Mecca and Medina, he also traveled extensively around the Muslim world, documenting and capturing Islamic culture and traditions.

Mr. Peter Sanders has taken the time to conduct an interview with us about his experiences accumulated over the past 35 years.


Lastprophet.info:  Peter, your professional career in photography began during the mid-sixties, at which time you were photographing legendary music icons, such as Bob Dylan, Jimi Hendrix, The Doors, The Who, and the Rolling Stones. In the 70’s, you set out for India on a spiritual quest, at a time when a wave of Westerners were sweeping through South East Asia, known as the “Hippie Trail.” Please describe your emotions and frame of mind at the time.  What triggered your sudden curiosity or need for a higher power; and was it indeed sudden? What was it that led you to Islam – a religion that was quite distant from most Westerners at the time?

Peter Sanders:  I had read a couple of books that had triggered a deep interest in higher things. Plus, I had started meditating and began having very intense dreams. The journey to India was a quest to find a spiritual teacher. I spent seven months in India, and during that period I studied all the religions, Hinduism, Buddhism, Sikhism and also read about Islam.


Lastprophet.info:  Would you say that being a person who has always looked at the world,  literally through a different lens, perhaps enabled you to perceive Muslim culture and the Islamic faith in a different light during your journey through Muslim territories on your way to India, at a time when perhaps most travelers might have just been concerned with getting to India?

Peter Sanders:  As I had flown directly to India, I really only came across Muslims in large cities but I do recall a small village where I lived for a period in a mud house, which had a small mosque nearby. Every morning I would get up to meditate and I would hear the local muadhin making the call to prayer.


Lastprophet.info:  In 1971, you were granted the opportunity to photograph the rituals of Hajj. Describe what Mecca was like in ’71. 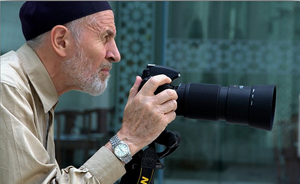 ere so different during the early 1970’s. The Haramain were not separated from the local houses. It was therefore much more intimate. I remember a great shaykh from Syria taking my hand and proceeding to give me a tour around Mecca. He showed me all the amazing historical sites, places the Prophet Muhammad (peace and blessings be upon him) had visited. In one house was his bow in a glass case; all that has vanished now.


Lastprophet.info:  Did you need a special permit to photograph the sacred sites, as one would need today? If so, what did that entail?

Peter Sanders:  It was so difficult for me to obtain permission to photograph the Hajj. It took me two weeks, going from office to office in Mecca and Jeddah. Finally, as it usually happens, I entered the office of someone who decided to trust me and gave me permission. He also gave me a soldier to accompany me.

Lastprophet.info:  Were you one of the first Westerners to photograph Islam’s sacred cities.

PETER SANDERS:  Historically, there have been characters that were occasionally allowed there, including Burton and Thomas Abercrombie of National Geographic, who had photographed there a few times. But yes, in the early 70’s it was still quite rare for a Westerner to be granted permission. These photographs were published widely in the UK and Europe, in the Sunday Times Magazine, The Observer, Paris Match and Stern.

Lastprophet.info:  When was the last time you visited the Holy Cities, Mecca and Medina, and how do you feel about the changes (“developments”) that have taken place, in Mecca in particular?

Peter Sanders:  It has been a couple of years since I have been to Mecca and Medina. Last time it was just for a few hours, but a few hours there is equivalent to days and weeks in other places. The changes there are really accelerating. I have not seen the new clock tower in Mecca, although I have seen photographs of it. I have also seen some of the plans that have been put forward for the total redevelopment of the Haram area.  The difficulty with all the new high buildings surrounding the Ka'aba is that psychologically it makes it appear smaller. Of course it’s the same size but that’s the effect it produces. In the Ottoman period there wasn't anything larger than the House of Allah nearby.  Personally, I think it stemmed from recognizing the sanctity of the place. I do know though, that all these development are done in the name of improving the place to accommodate the increase in visitors.  I recall during the development of Medina in the 90's, I noticed that all the engineers had old pictures of the Prophets Mosque in their offices. Although actually involved in the redevelopment, they seemed to prefer the old Uthmani section.  I had seen an old painting of the interior of the Dome of the Rock in Jerusalem done in 1850 by a Dutch painter and when I visited Jerusalem in the late 1990's I noticed it was basically the same. I think this is partly because they haven't had large sums of money to spend on redeveloping it. It is a fine balance to preserve something and accommodate the large numbers that modern transport allows to visit.

Lastprophet.info:  How have the technolo 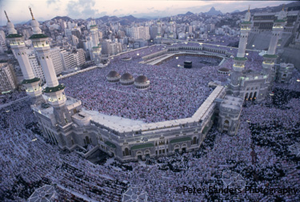 gical changes in photojournalism and documentary photography affected your work throughout the years? (How has digital technology changed your life and your work?)

Peter Sanders:  I made the shift from film to digital some 5 – 6 years ago – very reluctantly, I might add. I love transparency and had used this consistently for thirty-five years. I tried to take both simultaneously for a few years, but they are both very different mediums. For interiors and mixed lighting, the digital is much easier to use and the software in the last few years has become very sophisticated. But with good natural light, transparency is wonderful although it is getting harder to find places to process it.  The professional lab I use is one of the few places still processing a good amount of film each day. Digital on a plus side enables me to see on location exactly what I have taken, allowing me to re-shoot if necessary. On a negative side, I seem to spend most of my time staring at a computer screen!


Lastprophet.info:  What kind of an impact do you think your photographic documents will have on future generations?


Peter Sanders:  I think one can never know the effects that images can have on people. With the publication of these photographs in the early 70's of the Hajj, I remember having very interesting conversations with friends and colleagues who had never seen images of the Pilgrimage, Mecca or Medina. Nowadays, there is an abundance of images. Every phone has a camera in it, so now even the Holy places are not exempt from modern technology.

Lastprophet.info: As you know, Lastprophet.info aims to introduce the blessed Prophet of Islam to the West, as well as bring his spirit back to Muslims around the world. Your work has certainly contributed to a similar goal on a visual level. What kind of advice can you give to young Muslim photographers today? What methods can they use to infuse digital media with their Islamic heritage, which would in turn produce a positive message conveyed through their works to a non-Muslim audience?

Peter Sanders:  I always advise my students to be their own worst critic. Continually try to perfect what you do and remember that one of God’s names is al Mussawir, the Fashioner, the Shaper of Unique Beauty and the Most Perfect Artist who gives everything the Most Unique and Beautiful Form. 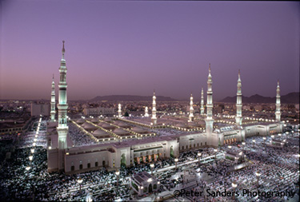 Lastprophet.info:  What are you working on currently?

Peter Sanders:  We are currently digitalizing my lifetime archive of transparencies (well over 250,000) to create an on-line website specializing in the Islamic World. This is very labor intensive and we are currently running out of funds, so we are looking for sponsors and patrons to work with. I have a very big vision for this; we bought the name islamicimages.com a few years ago and I am keen to add other historical and important collections to this.  I am also currently building a new Peter Sanders Photography website. Furthermore, I have a handful of book projects that I have begun and would love to complete. One of them that I have been working on since 1971 is entitled ‘Meetings with Mountains,’ which is a photographic book of saints, scholars and shuyukh that I have been fortunate enough to meet and photograph from all over the world.  This is the true spiritual face of Islam and a project that is very close to my heart and I am keen to complete it. But finding serious publishers is a serious challenge these days.


To sponsor or contribute to Peter Sanders's online project, please send an e-mail to: photos@petersanders.com

The Lens of Islam: An Interview with Peter Sanders