As a model person, Prophet Muhammad (pbuh) exhibited exemplary behavior with his words and practices to provide guidance to Muslims in their daily lives. The recordings of his companions allowed them to be transmitted onto the next generations. There is almost no case for which we have no information on the Prophet’s stance. Examples of his behavior on how he articulated his emotions and thoughts, his relations with people and how people were influenced by these actions will enable us to both get to know him better and more effectively benefit from his guidance.

The presence of so many narratives describing the attitude of the Prophet on any given subject signifies that he acted with consideration of the circumstances. Despite many examples displaying his generosity, the discussion of even one will suffice to show the degree of his maturity.

Even though Safvan bin Umayya, a prominent Quraish idolater, had not become Muslim after the conquest of Mecca, he did not leave the Prophet's side in the battles of Hunsin and Taif. While the Prophet was walking among the spoils of war at Jirane and looking them over, Safvan was beside him and looked with amazement at the valley full of camels, flocks of sheep and goats, and shepherds.  The Prophet was following him out of the corner of his eye and said to him: 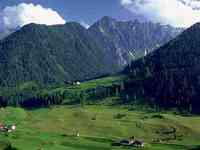 The Prophet replied:
-  You can have the valley and everything in it!

Safvan could not help but say:

- No one but a prophet could be this generous at heart.

He said this and became Muslim.  Later he returned to the Quraish and told them:
- O my tribe! Become Muslim. I swear Muhammad (pbuh) gives such gifts that he does not fear poverty and hardship at all.

Described in references as more generous than the rain, the Prophet saw stinginess as a quality that belittles man. Throughout his life he never hesitated to extend a helping hand to people in need even if it meant borrowing.

Generosity is the raw material of those who are able to gain Allah's virtues. When made without ostentation, without hurting anyone, without reproach, from what is valuable to the owner, and without expectation of reward - then generosity is meaningful. Generosity is being able to give without someone's asking for it or deserving it.

The harsh conditions of desert life had developed an understanding of virtue unique to the Arabs who continued tribal life. Generosity was at the head of values aimed at social solidarity. So much so that generosity was one of the most important qualities sought in candidates for tribal leadership.

Islam put its own imprint on this subject and set out by regulating the position of human in the world and his perspective toward what he possesses. A person who sees Allah as the real owner of property and goods will grasp that he is in this world a trustee, he will not arbitrarily use property which is one of two important vehicles of trial (the other is indicated as children - Qur'an 64/15), and just as he will avoid waste, he will also not delay any spending on Allah's path.

This narration teaches us that when spending in the name of Islam what needs to be paid attention, regardless of whether the recipient is Muslim or not, is that gaining a person's heart is more important and takes precedence over material gains. It shows that in calling to Islam no person should be overlooked and that a way of winning hearts can certainly be found. It makes one think that if there is a problem on this subject, before finding fault with the other person, it is necessary to take other people's sensitivities into consideration. As a matter of fact, the Prophet's superior stance before worldly things must have shown Safvan (and those like him), who gave meaning to his existence via the property and goods he possessed, actually what is valuable and that the Prophet's goal was not power and dominance.

The road to everyone's heart is different. Perhaps what everyone deems valuable is not so worthy, and a sacrifice that seems simple to you can increase your value in others' eyes and destroy prejudice.

it helped me with my work too

this really helped me with my work

A Different Perspective on the Mawlid

Between Allah & Jesus: What Christians Can Learn from Muslims