Mustafa Cagrici, The Mufti of Istanbul, on the events of Karbala Lastprophet.info

Mustafa Cagrici, The Mufti of Istanbul, on the events of Karbala 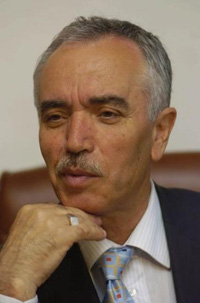 December 16th, 2010 (corresponding to the 10th of Muharram, 1432 Hijri) is the anniversary of Karbala, one of the saddest events in Muslim history. We asked Dr. Cagrici about the day of Ashura and how present day Muslims should approach the events of Karbala. His message, which emphasized that the incidents which took place at Karbala, should not continue to be a cause of dispute among Muslims, is very important:

Dr. Mustafa Cagrici: The month of Muharram is important for Muslims. Insha’Allah, it will bring blessings to all. It is also the beginning of the Islamic New Year; we have entered 1432. It is known that even before Prophet Muhammad’s (p.b.u.h.) time, people fasted on the day of Ashura. We understand from the Hadith of the Prophet that the Jews who lived during the time of Prophet Muhammad also fasted on this day. The Prophet Muhammad advised Muslims to fast two days in a row, either the 9thand 10th, or the 10thand 11thof Muharram, so that they would not be copying the Jews – who were only fasting on the day of Ashura.

Alongside such joyous events, the incident of Karbala, an event that has left a deep scar in the Muslim world, took place in this month. Prophet Muhammad’s beloved grandson, Hussain (r.a.), son of Fatima (r.a.), and Ali (r.a.),were attacked and massacred along with 73 innocent people, most of them close relatives of the Prophet himself.  This incident caused great sadness in the Muslim world and has never been forgotten. The events of Karbala have been named to be the cause of many factions among the madhabs.

Karbala should not be the cause of sectarianism; it is a sadness shared by all

All Muslims feel anguish over the martyrdom of Hussain (r.a.), and again Muslims from all parts of the world have strongly condemned this massacre throughout history, so as today. The events of Karbala, which were a common cause of grief for Muslims in the beginning, have been later manipulated into religious and political matters, and have begun to be viewed differently. We hope that, from now on, this event will not be remembered as a reason for disagreement, but as a grief shared by all. It will take its place in Muslims hearts as an event that channels them toward unity in the face of fitnah and treachery.

The historical depth in the back ground of Muslim women

Prophet Muhammad as an Enemy