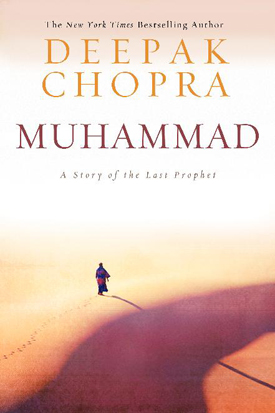 Muhammad: A Story of the Last Prophetis a fictionalized account of the life of Muhammad.  Unlike many biographies of Muhammad, this novel fills in the gaps between authenticated historical details with the author’s own creative license.  Each chapter of the novel is told from the perspective of individuals who encountered the Prophet as both a child and an adult.  Such well-known figures such Halimah, Umar, Khadijah, and others become scripted characters who through their own storytelling shape the persona of Muhammad amidst the tumultuous backdrop of pre-Islamic Arabia.

Although the storytelling in the book is what makes the novel engaging, there’s a sharp feeling of reluctance to fully engage in a storyline that is at times historically accurate yet emotionally false. Chopra’s seemingly innocent attempt to bring a greater sense of familiarity of the Prophet to both Muslims and non-Muslims created an underlying tension that could not be overlooked.  The emotional connection that is created through the “personal” narratives of historical figures is undermined by an unsettling knowledge that words are being put into the mouth of Muhammad and others.

One of the truly unique features of Islam as a faith is its strict reliance upon information that can be traced to an authenticated source-either the Quran or Prophet Muhammad.  This ability to understand where and how Islamic teachings came about forms a very necessary component to the faith.  One must remember that the emergence of Islam was not merely to instill the concept of One God to the people of the Arabian desert, but also to restore the concepts of one God that had been lost through embellishments of historical facts and religious teachings. While Chopra succeeds at setting the stage for anyone to embrace the Messenger as an incredibly complex and beloved figure, the novel straddles the fine line between creating a medium that endears readers to the Prophet and misleads through innovation.

Reading how Chopra imagines the conversations that took place during some of the most familiar accounts in Islam’s development can be quite grounding.  While most may be familiar with the story of how Muhammad received revelation from Allah through the Angel Jibril, the fear and reluctance felt by the Prophet is something that is generally perceived as a stage that was shorter lived. However, Muhammad’s uncertainty is punctuated throughout the novel which helps to communicate the sense that Muhammad had clearly become part a mission that was not of his choosing.   This sense of reluctance is rather powerful because it shows how the Prophet wrestled with his own emotions despite having belief.  This gives clearance for the reader to better understand the notion of what it truly means to be on a spiritual journey. Muhammad learned to be comfortable with self-doubt and trusting in Allah’s guidance to help remove it.

Despite what people, Muslim or non-Muslim, may know about Muhammad, there is a tendency to negotiate his character along a spectrum of intense reverence to off-hand dismissal.  Chopra’s development of Muhammad’s multi-dimensional character does not leave room for dismissal.  Chopra creates a story that builds more fully upon the reality of Muhammad being a self-proclaimed “man among men”.  It is clear that Chopra wants for the reader to get a sense of how Muhammad connected with people both pre and post revelation as a significant means of displaying that the spiritual nature of the individual inclines towards a certainty of divinity yet external factors allow the soul to doubt.

Upon concluding the book, I was left with a lot of mixed emotions.  I came away having felt that I had gained a greater sense of intimacy with the complex struggles that the Prophet endured to found Islam.  Yet, I have been left with some very vivid images that I have now attached to my mental record of the life of Muhammad.  While the beauty of this novel is that it draws you in through Chopra’s imagination, it is also its danger.

I believe in creating familiarity with the Prophet and creating alternative approaches to understanding our dear Prophet.  However, this novel is a peculiar tool in that it brings people to a greater understanding of Muhammad while offending Muslim sensibilities in a very blatant way. Those who have read other literature on the life of Muhammad are sure to have paused for a moment and imagined their own version of details of what the Prophet must have been thinking during various stages of his prophecy.  The raw biographies leave the reader to form their own imaginations beyond the historical account.  What Chopra’s novel does is place his imagination into the public record.  This work is unique, however, because it does just that.

Though the book is a novel, I would love to have seen an accompanying set of references that the reader could use to understand Chopra’s point of narrative.  Though the stories were familiar, the additional details left me confused about whether a stated event was a historical fact or another half truth.  The benefit of the confusion is that it leads you back to the historical biographies to grapple with the factual nature Chopra’s accounts.

Deepak Chopra’s novel makes Muhammad accessible and familiar to a whole new audience.  Sometimes it takes an outsider to invite you in.  May Muhammad: A Story of the Last Prophet serve as guide and an invitation to understand an incredible man among men.