Robby Ramazan Verburg (45), born in Rotterdam, the Netherlands is an accountant. He currently resides in the Netherlands. He embraced Islam about 6-7 years ago.

When and how did you come to embrace Islam? Is there any "one" incident you can pinpoint? 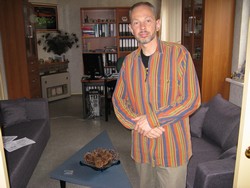 It happened about 6-7 years ago. While my whole family is atheist, I always had a need for more meaning in life. It has taken me a long time to realize that life is not endless and to accept the fact that death is imminent. I looked for the most plausible answer for my existence and found that all things are created; so I believed that I had to have been created too. Then I looked for a way to find my Creator and after some time as a Buddhist, I found Islam. And yes, Allah loves all his creatures and when He sees that they are in need of help - He shall grant creatures what they need. He will make you aware of problems and test you so that you will get to know Him. For me, this test was an accident with my parents and loosing my job. But most of all, it was the situation at home, as there was an endless struggle for life and no harmony. "I don't want to be like my parents, I can be different", I said to myself.

What was the process of conversion like? What becomes different in your life when you convert?

All new things are difficult, especially if your whole family is atheist. They say things like "Muslims are all terrorists and Islam is a stupid belief". But my brother said, "Be patient with them, I have done so. May Allah forgive them and show them the way to "love" him." It is a blessing bestowed on me by Allah that I have a good-functioning brain which makes me strong.  I did things step by step and tried not to fail. Many brothers tried to help me, but this made it only more difficult. Everyone has the best in mind, but so many times I came out wrong. Fortunately, I have a steady personality and can take blows. I still think with my own mind about my belief. Allahu Akbar.

What about your early religious background (upbringing)?

I had no belief at all; I'm European and belief is more or less dead in my country.

Do you remember the first time you heard about a religion called Islam?

I was working as a bookkeeper and had many Turkish customers who were Muslim. And because Buddhism is very hard to realize, I was looking for something else. I found that the Muslims were always very friendly and had a strong belief. My friends gave me some books about Islam. And I learned that Allah was the Creator of all things and that He is the reason for life. If you believe in Allah, you get an eternal life of Bliss. That is all I wanted; to have a goal in life and back then I found it.

What were the things that you liked or admired about your Muslim friends? What kind of influence or impact did they have on you in regards to Islam?

There is a kindness and helpfulness between Muslims, just as it was in the 60's in my country. With the fact that Muslims pray 5 times a day, I thought that this must be the real belief. I'm a practical man and with these prayers I could show God that I was really thankful for all the things I have gotten from Him, even if I had no Knowledge of Him. Also they cleanse themselves before praying - to be clean (physically and mentally) is necessary to rid oneself of all the dirt from this world.

What made you think that Christianity (or... ) was not the right religion for you?

Practice -praying 5 times a day is the only way to maintain close contact with God.  In Islam, life and belief is one - it is integrated. I did not find this in the Christian belief. But the most important thing is -for me there can only be one God.  Logic says so:  Buddhism states there can be no God, one God or  an infinite God - but the first and last are not logical. I always thought so, even before I became a Muslim. For me " Isa "(pbuh) is not a god, he is just a messenger just like those before him. There can be no more than one God. May Allah show them the way to the truth and forgive them.

How did people respond to you converting to Islam such as your family?

At first, my mother was very difficult, but I'm a quiet guy and patient. I did not reply when they said negative things - they just did not know. I have good parents and they played a part in my current belief. The rest of my family wasn't so bad. If you do not accept the fact that all things are created, you cannot understand someone who believes.

How can you compare the notion of prophethood in Christianity and in Islam?

Prophet "Isa" was a man just like Muhammad (pbuh) who was sent with a message to lead people to the truth; like the ones before them. We have only the knowledge that Allah gives us. The truth is universal and always the same; in whatever context you will place it, it cannot be different.

What did you find closest to your heart about our Prophet? What was the most appealing thing about him?

I became a Muslim through logic and did not know much about him, but when I saw him in my dream, I knew all I needed to know. His NUR and love is so great, you cannot do anything else but fall in love with him. When he came for me to take me out of that dark room, I knew it was him in a second. You just know who he is; he doesn't have to say who he is. I have read a lot about him and I knew that he was a peaceful man. In these days, I think many Muslims forget that. I always say peace for those who want peace. His behavior was sublime - it is a shame that we don't practice his way much. Love and more love.  This is it for me.

How is Prophet Muhammad perceived and received in the part of the world that you come from?

With much prejudice - This is normal when you don't have any knowledge.  You must know, it was a different world. For me, I see only his love and that is enough for me. I cannot know how it was to live in his time, but I don't care; I am living now.  I want to live as much like him as I can, but I know I cannot.

How is the Mawlid of Prophet Muhammad celebrated in the part of the world that you are living in?

Not much anymore in my city - but muhabbet is gone now because of the dunya. Life is very hard now for many people, and they follow their desires for material things; we think this is all we need to be happy. I think we have lost the way to happiness by loving the material world. I know that Allah will bring us back to the truth - look at the world now and everyone can see what Allah is doing.

What was your name before embracing Islam?

My name was Robby before embracing Islam.

What is your Islamic name and why did you choose this name?

Ramazan, because I became Muslim on the first day of Ramadan about 6-7 years ago. I spent most of my time with Turkish brothers and they gave me that name; I like it.

From a Trustworthy Prophet to Islam

Why is Islam the most Rapidly Growing Religion in the United States?

Following the Steps of the Prophet in Argentina

Conversion: Changing Religion or a Return to Primordial Nature?

Quicunque Vult: or, My Journey to Islam - III