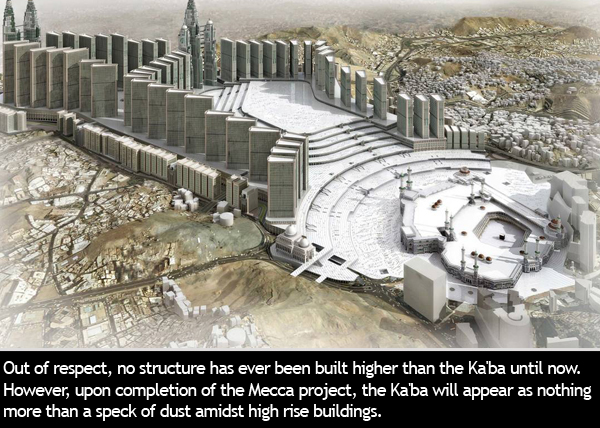 The Ka’ba, which has maintained its firm spot as the center of tawhid – belief in the the oneness of Allah – since it’s initial construction by Prophet Ibrahim (p.b.u.h.) and his declaration of the hajj (pilgrimage), is shrinking before our very eyes.

Is the Ka’ba, which has held its ground against natural disasters of all kinds and even wars, now going to declare defeat in the face of the wealth of those flexing their muscles? A few years from now, and exactly a few years from now, the pilgrims who flock to the Ka’ba in order to ask Allah (s.w.t.) for forgiveness and tread the land on which Prophet Muhammad (p.b.u.h.) lived, will come across images that are very different from today.

A loud voice needs to be the raised regarding the developments in the Holy Land, in which there is a continual demolition of symbolic venues of Islamic architecture and history.

Following the announcement of the “New Mecca” project, planned by the Saudi Foundation under the auspices of the King of Saudi Arabia, King Abdullah, to the media, there have been discussions, albeit too far and few, taking place in the Islamic world to this end. The Ka’ba, which is the center of Islam, will become a tiny spot surrounded by skyscrapers in the years ahead. According to the published scale model of the project, the surrounding areas of the Masjid al-Haram will resemble trade centers.

The current scene around the Ka’ba features a holy structure that is surrounded by cranes and ever-rising cement blocks.

60 skyscrapers to be erected 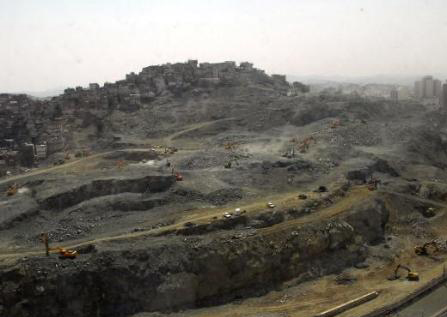 Sixty skyscrapers which are 30 stories high are envisaged for this project. It is expected that at least 100,000 people will reside in this area. Furthermore, it is planned that the Intercontinental and Hilton hotels, located directly in front of Mount Omar, will be demolished and skyscrapers will be built directly behind this area.

Ka’ba will be unrecognizable over the next decade

The projects, which are envisaged to be completed over the next decade, will change the entire area surrounding Islam’s holiest site. Another change taking place, although not related to this project, but to the Mount Kindama works, is the construction of luxurious hotels and shopping centers on the hilltop located directly behind the Kingdom Palace next to the Ka’ba. It is said that, according to the latest photographs from the project, the holy structure will look more like New York or Tokyo, rather than Mecca.

The world’s greatest clock by the Ka’ba 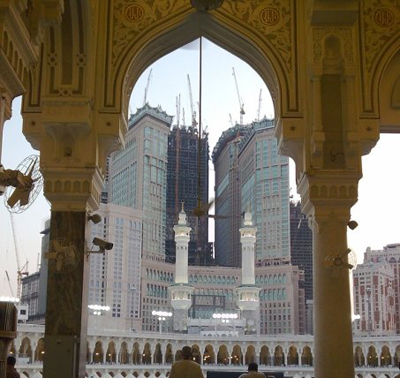 Investors, who have taken it upon themselves to restructure the areas surrounding the Ka’ba with luxurious buildings, have unveiled the world’s largest clock tower during this past holy month of Ramadan. This awe-inspiring clock tower, is six times the size of its counterpart in London: the Big Ben. Furthermore, the structure which was built as part of the Mecca Royal Clock Tower Hotel, is the world’s second largest structure, lagging only behind the Burj Khalifa Skyscrpaer in Dubai. The top of the clock, which was constructed atop the roof of the hotel, boasts 21,000 white and green LED lights which can be seen from 30 kilometers away, lighting up to announce the five daily prayers.

Hotel rooms with a Ka’ba view

Over the last 20 years in particular, the Islamic heritage surrounding the Ka’ba has been completely negated while continual destruction took place. An investment of 115 billion USD has been made so far. The hotels and shopping centers built in the area have provided employment for thousands of locals and international workers. According to the real estate figures in the country, the land which has a Ka’ba view has a value of 80,000 USD per square meter. Mecca, whose population is 1.3 million, hosts approximately 4 million Muslims during Hajj and 3 million during the rest of the year. Muslims who arrive from all over the world to perform their pilgrimage requirements, expecting various services thus provide new economic opportunities for the country. 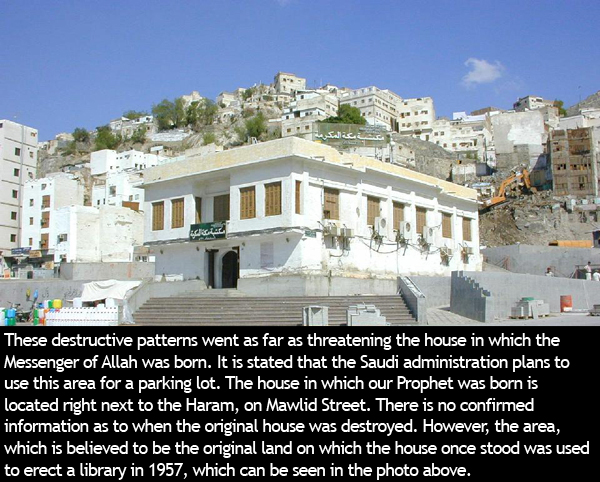 What has been destroyed thus far?

According to information obtained by archaeologists, over 80 years, approximately 300 Islamic structures were demolished with bulldozers or dynamite in Saudi Arabia. Here are just a few of the structures who once were:

• In 1997, an Intercontinental Hotel was constructed in the same area.  Each one of the hotel’s 615 rooms has a Ka’ba view. 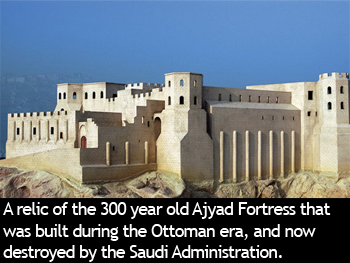 • The 350 year old Ajyad Fortress, which was built during the Ottoman era in order to protect the sacred lands in Mecca, was destroyed by the Saudi Arabian administration on Jan. 3, 2002, despite stern reactions from Turkey. In its place now stand the Zam Zam Towers along with luxurious high-rise buildings.

• The 1200 year old Sayyid Imam al Uraydi ibn Jafaar Saadiq tomb and mosque, located four miles away from the Masjid an-Nabawi in Medina, was destroyed with dynamite on August 13, 2002.

• The 1200 year old Qubais Mosque, located on top of the Abu Qubais Hill was replaced with an imperial palace. The palace was built attached to the Ka’ba.
• These destructive patterns went as far as threatening the house in which the Messenger of Allah was born. It is stated that the Saudi administration plans to use this area for a parking lot. The house in which our Prophet was born is located right next to the Haram, on Mawlid Street. There is no confirmed information as to when the original house was destroyed. However, the area, which is believed to be the original land on which the house once stood was used to erect a library in 1957, which can be seen in the photo above.
• The historic lands on which the battles of Uhud and Badr took place were transformed into park land.

• The archways which were built during the Ottoman Empire into the area of tawaf and kept at a height lower than that of the Ka’ba, were removed as part of the Mecca Project.

The drive behind the destruction

The indifference of the Saudi administration and people in the face of all this destruction, which was worrisome for all Muslims: from England to Turkey; South Africa to Algeria; Palestine to the US, created a new wave of debates.

The background behind the idea for the destruction of these structures stems from a kind of Islamic interpretation, known as Wahhabism. According to the Wahhabi school of thought, which came to be under the leadership of Muhammad bin Abdulwahab in the Saudi Arabian city of Najd in 1744, everything which didn’t exist at the time of Prophet Muhammad is forbidden. This rule extends to graveyards and tombs; it’s not just the existence of graves, but their mere marking which is considered forbidden. According to this school of thought, turning the graves of prophets or saints into tombs is worshipping those other than Allah. Every tomb is a house of idolatry. According to the Wahhabis, who have a stronghold over Saudi Arabia, there are no qualms of conscience to be had over the destruction of these sacred structures.

Share your thoughts on the so-called transformation taking place on the Sacred Lands with us. In order to add your views and share your opinion with us, please click here.

Assallamuallaikum, I am not usually one to comment and I don’t really feel comfortable but feel like I have been searching to voice my opinion in some way other than in my head if that makes sense. All of my life I have been blesses with the bestest father who only spoke of Allah’s house and our dear beloved Prophet (pbuh), he would show us old photos and I would dream of seeing them blessed places with my own two eyes, sadly I was unable to take my father before he passed but allhamdullillah did Ummrah with my mother and family in 2017, I will not say that I was disappointed maybe just hurt that it was not how I saw it in my eyes as a young child and I was hurt by the western feel of the whole place, may Allah swt guide us on the right path and help us hold on to what presious historic monument we have left for the future generations rather than turn the most beautiful place on this planet into something commercial

The First British Guest of Allah

He Called and We Obeyed

Miracle of Sound at the Ka'ba