Highlights from the Lives of Converts

I left my home in Maryland more than 40 years ago to seek my fortune in California. My search began with the words of Prophet Jesus:

Seek and you shall find,

Ask and you shall receive,

Knock and it shall be opened unto you [Matthew 7:7]


And ended with the words of Prophet Muhammad (pbuh):

Tether your camel and trust in Allah.


In the years between these two Prophets, I read over 1,000 books in search of the truth including psychology, sociology, anthropology, religion, history and philosophy. I was especially interested in feminism, Carl Jung's psychology and New Age Metaphysics with a special emphasis on Judaism, Tibetan and Zen Buddhism, Yoga and Hinduism, the Upanishads, and the Bhagavad Gita. Each of these spiritual systems answered some of my questions but each, in turn, raised even more unanswered questions-always there was something missing, but what it was I didn't know.

In March 1993, I started studying Sufism and read many books and called many Sufi centers, until I found a Sufi teacher, who gave me special Sufi books to read. Then I went to the Islamic Center of Southern California and attended the class for new Muslims; I realized that I already knew all I needed to know about Islam and all I had to do was to declare the shahada!

After my conversion into Islam, I finally discovered what I had spent 40 years looking for- a way to make sense out of everything in the universe- from subatomic physics to giant galaxies, and everything else in between!

America is ripe for Islam! And I am pleased and honored to be a part of the Islamic Renaissance that is taking place in America today. New converts to Islam are reviving the moribund spiritual environment that obtains not only in American religion, but also in those mosques which have lost touch with the beautiful example of the Prophet of Islam-aswa hasana.

I was 13 years old when I took the shahadah in 1959. I had heard the teachings of Elijah Muhammad and I joined the Nation of Islam. Since his death in 1975, I have been on the sunnah of the Prophet and the resolution of the Holy Quran.

In my case, Muhammad (pbuh) won over Jesus Christ and everything connected to Christianity, because as a young boy, I had seen Christians beating Negroes in the civil rights movement and I did not want to stay connected to a religion that seems not to care about all human beings.

Prior to my introduction to Islam, I knew that I yearned for more spiritual fulfillment in my life. But, as yet, nothing had seemed acceptable or accessible to me. I had been brought up essentially a secular humanist. Morals were emphasized, but never attributed to any spiritual or divine being. The predominant religion of our country, Christianity seemed to burden a person with too much guilt. I was not really familiar with any other religions. I wish I could say that, sensing a spiritual void, I embarked on a spiritual quest. But I was too comfortable with my life for that. Instead, it was the "chance" meeting of various Muslims that instigated my study of Islam.

As I met Muslims, I was struck not only by their inner peace, but by the strength of their faith. These gentle souls contrasted with the violent, sexist image I had of Islam. Then I began to read about the life of Prophet Muhammad (pbuh) and to read the Quran itself. As I read about the Prophet, I began to question my initial belief that he was merely an exceptional leader. His honesty prior to any revelations, his kindness, his sagacity, his insights into his present as well as the future- all made me question my initial premise. His persistence in adversity and later, his humility in the face of astounding success, when he could have enjoyed tremendous wealth, he refused to own more than his poorest companions in Islam.

Slowly I was getting deeper and deeper into the Quran. I asked, "Could a human being be capable of such a subtle, far-reaching book?" Furthermore, there are parts that are meant to guise the Prophet himself, as well as to reprimand him. I wondered if the Prophet would have reprimanded himself?...I understood that the evidence present in the life of Prophet Muhammad and in the Quran was too compelling to deny. At that moment, I was also ready in my heart for Islam.

Like most children of my era in America, I knew very, very little about Islam. SOmetime in my childhood I had heard about some "Mohammedans." They were strange and fierec people who lived in the Sahara Desert, rode camels, believed in a god named Allah, and believed in some man named Muhammad (from whom they got their name), who they thought was a prophet and who had written a book called the Koran.

Over the years, I experimented with different religions. I could not embrace Islam despite reading the Quran and attending the masjid in Virginia. I could not put it past me either. I "stumbled" across soc.religion.islam to which I subscribed and started reading the postings. Eventually, I screwed up enough courage to submit a posting on "Islam". I received various courteous emails in reply, so I kept up with S.R.I. And I felt drawn closer and closer to Islam...

I encountered Islam in 1986 by way of a young man named Fahim who introduced himself as a Muslim. I asked what a Muslim was and he invited me to a Jumuah prayer. Later, out of sheer boredom, I read the books he gave me. I was not serious about becoming a Muslim but I wanted to know why I had not heard of Muhammad before then and who was he for real. At that time, I had the Prophet Muhammad mixed up with Elijah Muhammad. They then told me that Prophet Muhammad was the first Muslim and that Elijah Muhammad was the founder of the Black Muslims or the Nation of Islam....

I became a Muslim in 1994 after having read the Quran and meeting the most sincere and humble people I had known. I had known "Muslims" in the past and was not impressed with what I had seen. Because they were not practicing Muslims, I learned nothing about Islam. It wasn't until I read the Quran and learned about the life of Prophet Muhammad (pbuh) that I felt transformed. I have been walking on air ever since.

It is unfortunate that the media in this country is so biased against Islam and Muslims. Most Americans have no idea what Islam is about and are shocked to learn that I am a Muslim. I find most are curious rather than prejudiced...

How I became a Muslim? I suddenly felt a compulsion to read about this word Islam that I encountered often. I called a local mosque and the imam gave met he phone number of a local sister who said; "Why do you want to study Islam?" I replied, "I read that Prophet Muahmmad (pbuh) was told to read by the Angel. I must  read..."

(Graduated from Harvard Law School and served as Foreign Policy Advisor to Richard Nixon from 1963 to 1968; later elected as the president of Muslim American Bar Association and the Islamic Institute for Strategic Studies)

...People often ask me why I became a Muslim? I answer by saying that I didn't, because I've always been. A better question is why I am a Muslim. I can answer that by talking about tawhid (oneness of Allah) and adl (principles of justice). But form e personally, the real question is why Allah led me to Islam. The answer for every Muslim lies somewhere in the unique path that Allah has chosen for each one.

...When I learned that Allah is one, I could never again actually believe in Christian theology and could never become a priest. I could explain the Trinity as well as any Christian, but I knew the truth because of direct experience. Whenever I asked Catholic theologians to explain how they could pray to one of the Trinity and at the same time to God, the answer was always, "Don't think about it." Later when I became a professed Muslim, a group of missionaries came to me and said, "We hear you have problems." I answered, "No, any problem I ever had has disappeared. My only problem was the impossibility of praying simultaneously to the finite and the infinite as One god." Their only answer was, "Oh, but you don't have to become a Muslim. We all have this problem!"... 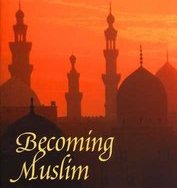 ...I entered a Catholic university and my relation to religion became increasingly called into question, in belief and practice...that Jesus was God was something I cannot remember having every really believed, in childhood or later..I also remember a desire for a sacred scripture, something on the order of a book that could furnish guidance. I found the Bible so rambling and devoid of a coherent thread. Only later did I learn how Christians solve the difficulty in practice-Protestants by creating sectarian theologies each emphasizing the texts of their sect and downplaying the rest. Something seemed lacking in a sacred book that could not be read as an integral whole. What remained of the Bible, except to acknowledge that it was a record of truths mixed with fictions, conjectures projected onto Christ by later followers, themselves at odds with each other as to who the Master had been, and what he had taught?

As I was getting closer to atheism, the philosophers I read including Hegel led met o theology. At this junction, I started to read massively on Islam including writers such as Ghazali and Seyyid Hussein Nasr.

...Christianity had its good points, to be sure, but they seemed mixed with confusions and I found myself more and more inclined to look to Islam for their fullest and most perfect expression. The first question we had memorized from our early catechism had been, "Why were you created?" to which the correct answer was, "to know, love and serve God." When I reflected on those around me, I realized that Islam seemed to furnish the most comprehensive and understandable way to practice this on a daily basis.

Taken from “The Sun is Rising in the West”, Muazaffar Halem and Betty Bowman, Amana Publications, 1999

Seeing the Prophet through the details: Tariq Ramadan

Islam Guarantees the Freedom of Belief

Conversion: Changing Religion or a Return to Primordial Nature?

The 'Black' Letters on the White Pages of Islam