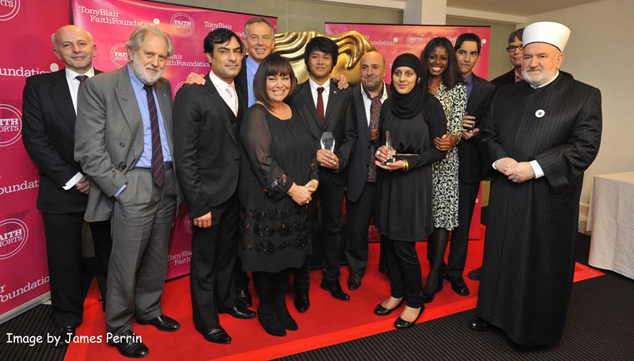 Fourteen-year-old British student Amna Aslam won the action category for her film “Muhammad in Accrington…Inspiring Me” at the 2nd Annual Film Shorts Film Awards at the British Academy of Film and Television Arts (BAFTA) in London.

Organized by the Tony Blair Faith Foundation and receiving hundreds of entries from five continents around the world, the competition allowed young people between the ages of 14 and 18 to express how faith inspires them through a three-minute film.

Amna Aslam’s winning entry documents the positive ways in which Prophet Muhammad and his teachings inspire students from Hollins Technology College in their everyday lives. Dawn French presented her award on the night.

Speaking on the occasion, Amna Aslam expressed her gratitude for the award and her happiness at the very positive and widespread response that her film received. 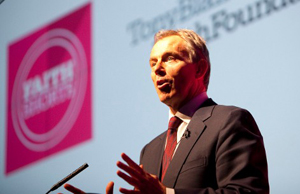 “I am so pleased that people liked our film and we had a lot of fun making it. My aim was to show a positive message about Islam and chose to do it on the Prophet Muhammad, peace be upon him. I believe his teachings and his messages are a real inspiration and they have a real universal appeal. The process has helped me to discover more about my faith. I value the opportunity to show how proud I am of my religion,” she said.

Speaking at the ceremony, former British Prime Minister Tony Blair, the Patron and Founder of the Tony Blair Faith Foundation referred to the power of faith as a motivator to do good in the service of others.

“We got an enormous range of films from all around the world that dealt with everything from love and loss and debt and shopping and gardening, believe it or not, and rapping and all of them had this one thing in common: that they were made by people who wanted to say how their faith inspired them to do good. How their faith inspired them to change the world for the better, to make a difference. This is a very powerful emotion that comes through all of these films,” he said.

Entrants submitted their films in the categories of family, music, and action. They presented personal messages of hope, peace and understanding between people of different belief and cultural backgrounds. 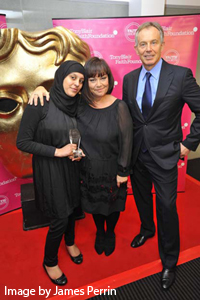 The winners of Faith Shorts 2011 for the family and musical category were Paulo Reyes, A Christian from the Philippines, and Nadim Merrikh, a fifteen year old Baha’i from Canada. The overall winner was Nadim Merrikh for his film “Be the Change You Want to See.” The rap music video aims to inspire young people to take action, in a positive way.

Lastprophet.info congratulates Amna Aslam for conveying the inspiration she receives from Prophet Muhammad and his message to the entire globe by means of the universal language of cinema.

It is our hope that her endeavor will continue to serve as inspiraiton for people around the world.

This is really INSPIRING..!!! The film evokes one to think in what other field Prophet has not inspired us.

On every humanitarian, positive, desirable, constructive, merciful, adorable and value based thought, one can find an imprint of the Prophet.

Makers of the film really deserve all the appreciations.

Exploring the Truth within Cinema

Educating Children with the Guidance of the Prophet

UIK Project: Our Love To The Beloved