During the 1920’s and 1930’s, Harlem, New York, became the center of black intellectual thought, art, music and literature. Due to the concentration of middle and upper-middle class blacks in Harlem, the ability to produce and consume black culture within a culturally unique enclave provided a stable mechanism for community growth and development. The “New Negro” that emerged from the era of the Harlem Renaissance came to embody the realization of black economic and cultural success. However, as many blacks fled the South between the 1940s and 1970s in search of greater economic opportunities in places like Harlem, the economic prospects for success grew slimmer. While Harlem has remained a Mecca of black culture, its ability to produce an economic return for blacks continues to dwindle. The historical significance of Harlem in the consciousness of black America is significant in that it continues to symbolize an era of cultural transformation and unity.

In Black Mecca: The African Muslims of Harlem, Professor Zain Abdullah shows how Harlem is undergoing a new 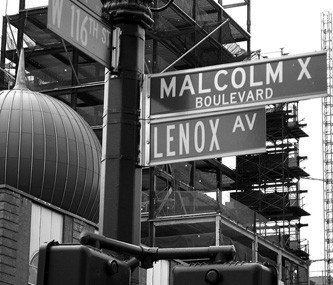 cultural transformation fueled by very different yet similar circumstances. Through a detailed ethnography, Professor Abdullah explains how immigrants from Western Africa have sought to carve out their own existence in an environment that has long symbolized a uniquely black American cultural space. The nuanced exchanges that occur between the blacks and the African Muslims tell a story of both mutual suspicions and mutual solidarity.

Abdullah demonstrates how many African Muslims have consumed countless negative images of blacks through the media in their home countries which has shaped their perceptions accordingly. Likewise, some blacks harbor resentment toward African Muslims for entering their cultural space without an understanding and appreciation of the history before them. One black American Muslim voiced, “They don’t realize all this didn’t just pop up. We’ve been here for sixty years. But they [Africans] don’t respect us.” Although this statement should not be taken as the prevailing view, the author’s encounters with individuals in both groups display many with the same undertones. However, the author provides far more perspective into how black Americans view their African Muslim neighbors than the reverse. It leaves the reader with little information on how African Muslims have come to know black Americans outside of the Islamic critique of American [black] culture.

Amidst the moments of contention, however, the author sees hope in the ways in which each group has extended invitations of kinship and brotherhood to the other. While the author does not explicitly make the connection between the important links that black Muslims play as cultural brokers, it is apparent in the conversations in his encounters. For the African Muslim and the black Muslim there is greater ease in economic and cultural exchange due to the assumption of mutual values.

Although the author acknowledges some economic success of immigrants, the predominant narrative of this work is the struggle towards an economic dream that is rarely realized. The tales of individuals leaving relatively comfortable lives as doctors and business people in search of prosperity only to find themselves in the American underclass dominates the experience of the West Africans in Harlem. As West African Muslims find themselves in menial jobs with limited language proficiency and no real prospects for growth, there is an increased desire to insulate themselves against the encroaching negative values. Abdullah demonstrates how as a result these circumstances sustain the relevance of Islam in the life of the immigrant.

In the backdrop of an anti-Muslim and anti-immigrant climate, Islam becomes the escape and constant to fall back on. The additional realities of a rapidly gentrifying Harlem includes the pressure being exerted on both blacks and African Muslims as both seek to hold their ground in their cultural and religious space. African Muslims and black Americans have built up a presence in Harlem through their own struggles which has made the neighborhood a place of jihad in that it is culturally sacred for the blacks and religiously sacred for the African Muslims.

The mosques of Harlem are where immigrants go to maintain their bonds with each other and to find meaning in their struggles in America. What is significant in Professor Abdullah’s observations is the recasting of one’s economic plight as divine providence. Although many West African Muslims are not able to find the lucrative jobs they imagined, many set up their own shops or drive taxis in order to maintain the flexibility they need to adhere to their Islamic faith and values. In a sense, their work on the streets as an effort to inform people about and to maintain their deen is viewed as amal saalih or blessed work. The recasting of the Western immigrant plight in this manner connects immigrants back to their families and provides justification and hopefor an improved condition.

According to the author, “coming to America is part of a divine decree, their destiny, or qadr. Viewing African Muslims in Harlem as mere economic migrants, then, misses the full range of their plight in America. Moreover, their migration is connected to a sacred devotion to family, close friends, and a deep struggle to earn baraka, God’s favor. In this light, getting a job but losing religion constitutes failure. And while African Muslims have migrated to Harlem and other places in search of opportunities, many feel that these prospects must not come at the expense of their souls” (Abdullah, 180). The mosque becomes not only a place of worship but also a means of escaping the menial tasks that reduce many immigrants to chattel. In the mosques of Harlem they regain the sense of spiritual wholeness and equality before Allah.

Whereas black Americans underwent a cultural transformation as migrants from the South, the predominantly Murridiyah Sufi West Africans are bringing about a cultural shift that has resulted in the rethinking of economic migration. Establishing communities of faith has proven to be as essential to the survival of African Muslims as achieving economic success and the prospects for the growth of Muridism in the United States is as much as an appeal as any job opportunity. The notion of religious entrepreneurism whereby economic activities provide greater possibilities for religious practice is the silver lining in this narrative of struggle. Black American Muslims must also ensure that they fulfill the role of the ansar and keep their brothers from standing alone in this Mecca.

This book is a must read for individuals seeking to understand how immigrants deal with struggles as groups, and also as a means of understanding the tension that occurs in communities where immigrants have begun to transform the cultural space.

Black Mecca: The African Muslims of Harlem - A Review