The Qur'an began to be revealed on the Night of Power during the month of Ramadan. Revelation to the Prophet Muhammad continued in parts according to need during various periods of time, and this process lasted approximately 23 years.

Due to its being the month in which the Holy Quran was first revealed, the month of Ramadan has a special place in the lives of Muslims. 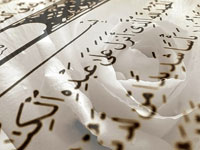 The month of Ramadan is the season when Muslims intensify their religious life. The Night of Power is the night this intensity peaks:

Due to the Qur'anic revelation continuing for years and its commandments being permanent until Judgment Day, it was preordained to be revealed in the month of Ramadan.

The month the Qur'an was first revealed was crowned with the act of worship, fasting: "...whoever reaches that month should fast."  (2) According to one report, the Prophet said, "fasting and the Quran will intercede for a servant on Doomsday. Fasting will say ‘My Lord! I prevented his eating and pleasure. Make me intercede for him.' The Quran will say, ‘I prevented his sleep at night; make me intercede for him.' Allah says ‘your intercession has been accepted.'"  (3)

The Prophet recited the Quran slowly word-by-word both during prayer and outside of prayer. He united with the word of Allah while reciting it. He made an effort to address it, and he contemplated for long periods on its meaning.

Today the tradition of muqabala (recitation of the Quran) during the month of Ramadan in Islamic countries is a result of the "arza sunnah."

The Prophet recited the Quran slowly word-by-word both during prayer and outside of prayer. (8) He united with the word of Allah while reciting it. He made an effort to address it, and he contemplated for long periods on its meaning.

The last holy book revealed to the last prophet, the Holy Quran, is the final divine address to mankind during the final days of time. Making necessary good deeds is possible by reading and understanding it. Allah, may His name be exalted, speaks with praise of those who read His book and states, "Those who rehearse the Book of God, establish regular Prayer, and spend (in Charity) out of what We have provided for them, secretly and openly, hope for a Commerce that will never fail: For He will pay them their meed, nay, He will give them even more out of His Bounty: for He is Oft-Forgiving, most ready to appreciate (service)." (10)

This verse praises not only those who read the Quran, but who at the same time make good deeds as necessary, and it informs that they will be rewarded by Allah. Reading the word of Allah, but not living its commands has no value in God's eyes.

Our Prophet called those who read the Qur'an and act accordingly the "people who are friends of Allah." (11)

In yet another hadith, the Prophet expresses that it is necessary to admire someone who reads Allah's book night and day and applies its precepts; (13)  that those who are skilled in reading the Quran are together with the angels called "Safara;" and that a double reward is given to someone who continues reading in spite of difficulty. (14)

Indicating that those who learn and teach the Quran are the most superior and best people, (15) the Prophet encouraged learning and teaching the Quran. He stated: "Learn the Quran; ten merits will be given to you for every letter read." (16)

Pointing out that those who continue to read the Quran become friends with it and that it will intercede for them on Doomsday,  the Prophet recommends that we illuminate our worldly homes and the home of our hearts with its light and decorate them with its beauty.

Pointing out that those who continue to read the Qur'an become friends with it and that it will intercede for them on Doomsday, (17)   the Prophet recommends that we illuminate our worldly homes and the home of our hearts with its light and decorate them with its beauty. He states, "I know of no greater ruin than a house that has nothing from Allah's book in it. Someone who has nothing in him from the Qur'an is like an empty and ruined house that has never been lived in." (18) With this hadith and similar hadiths, the Prophet encourages the Qur'an to be memorized and held in the memory. (19)

Indicating in many hadiths and in his life that listening to the Qur'an had great merit in addition to the importance and virtue of reading the Qur'an, the Prophet said, "I like to listen to the Quran from others." (20)

The Qur'an is the word of Allah. One who reads the Qur'an is not reading just an ordinary text. He is pronouncing divine speech with its words and meanings. Consequently, when a servant is reading it, he is conversing with his Lord. What a believer must do for Him is to realize that he is confronted with his Creator's words and to perform whatever duties this requires.

It is particularly meaningful to pay attention to the month and night the Qur'an was first revealed. Giving importance to the Qur'an by benefiting the month of Ramadan in this respect - by reading, listening, and following its commands - and thus attaining righteousness is a matter every believer should be careful about and it is the most virtuous act of worship.

Are We Ready for Ramadan?

The Opportunity of Ramadan