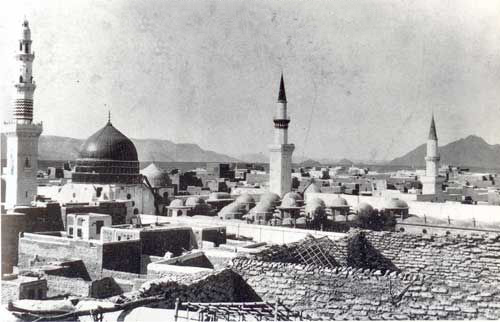 The ninth year of the Emigration (630-631) is known as the Year of Delegations (sanat al-wufud). The conquest of Makka, the subsequent acceptance of Islam by the large and powerful Hawazin tribe, the Thaqif tribe’s coming to Madina from Ta’if and pledging their commitment to the Prophet one year later, and northern Arabia’s falling under Muslim rule with the Tabuk Campaign caused Arab tribes living in various parts of the Arabian Peninsula to send delegations to Madina to declare their allegiance. Among these developments, alongside Makka’s conquest, the Quraysh tribe’s becoming Muslim assumed particular importance. With the Quraysh’s acceptance of Islam – who they gave great importance to and who constituted the most significant opposition to the Muslims – the Arab tribes reevaluated their own strength and stance and began to enter Islam. The Qur’anic chapter entitled Al-Nasr points to this issue as follows:

When God's help comes, and victory (which is a door to further victories), And you see people entering God's Religion in throngs, Then glorify your Lord with His praise, and ask Him for forgiveness; for He surely is One Who returns repentance with liberal forgiveness and additional reward (Al-Nasr, 110:1-3).

The delegations coming to Madina on behalf of their tribes and meeting with Prophet Muhammad declared their acceptance of Islam, pledged allegiance both in their own name and in the name of their tribes, wanted to the learn the religion from the Messenger conveying it himself, and sometimes requested that teachers be sent to members of their tribes. Among these delegations were representatives, such as those from the Thaqif and the Hanifa tribes, who propounded unacceptable terms aimed at exemption from some of Islam’s underlying forms of worship and evasion of some of its prohibitions, or those who thought only of self-interest. There were also those, as witnessed with the Christians from Najran and the Banu Taghlib, who accepted Muslim rule by paying the poll tax (jizya), without having become Muslim. The delegations’ coming to Madina presented a significant opportunity for the Prophet to convey the message of Islam. Such delegations were hosted in the homes of Companions such as 'Abd al-Rahman ibn al-'Awf, Ramla bint Harith, Abu Ayyub al-Ansari, and Khalid ibn Walid, or sometimes in the residence of the Ashab al-Suffa (those who stayed in the antechamber of the Prophet's Mosque), or in tents pitched in the mosque’s courtyard. Prophet Muhammad gave special importance to the delegates, reading and teaching the Qur’an to them, and explaining to them the essentials of the religion as well as its ethics and codes of morality. While the delegations were sent off from Madina with various gifts, the Prophet gave them information pertaining to things that they needed to take into account, assigned officials to collect the alms tax (zakat) and jizya or to teach Islam, and prepared written documents pertaining to these matters. The visits of these delegations indicate that tribes living in various regions of Arabia had accepted Islam and, what is more, recognized Madina as the capital of the Arabian Peninsula. In his work, Ibn Sa’d mentions together seventy one delegations coming from different regions of Arabia in the 9th (630) and 10th (631) years after the Emigration and provides separate information on each of these.

Although many Arab tribes became Muslim, it is not possible to say that Islam was established firmly in Bedouin tribes such as the Ghatafan and its sub-clans, first and foremost, as well as the Banu Hanifa and Banu Asad. In the Qur’an, the Bedouins hostile to Prophet Muhammad and the Muslims are criticized, and the negative attitude adopted by their majority have been referred to with the word a’rab (Bedouin Arab) (See At-Tauba, 9:90, 93-99, 101-102, 107-110, 120; Al-Ahzab, 33:20; Al-Fath, 48:11-17; Al-Hujurat, 49:14-18). From the Battle of the Trench onwards, the Bedouins adopted a clear stance against Islam (Al-Ahzab, 33:20). When the Prophet set off for the minor pilgrimage (6/638), he sent word to neighboring Bedouin tribes such as the Juhayna, Muzayna, Ashja’, and Aslam, directing them to join him; however, as they had not completely internalized their commitment to Islam and the Prophet, they failed to fulfill the Prophet’s directive, apologizing after the pilgrimage (See Al-Fath, 48:11-12, 16). A similar situation was experienced during the Tabuk Campaign (See At-Tauba, 9:90, 97, 107, 120). From the third year after the Emigration onwards (624), various sub-clans of the Banu Ghatafan became embroiled in several raids and killings, and the Islamicisation of this tribe became superficially realized only during the Year of Delegations (9/630-631). Hence, after Prophet Muhammad’s demise, chief of the Fazara clan ‘Uyayna ibn Hisn defected and joined forces with Tulayha ibn Khuwaylid, who claimed to be a prophet. Apart from these, the Banu Hanifa, the majority of whom lived a Bedouin life, tried to keep a distance from Islam. The delegation of this tribe, led by Salama ibn Hanzala, came to Madina in the tenth year after the Emigration (631) and expressed their acceptance of Islam. Possessing political and economic aspirations, however, the tribe’s members defected during the time of the Prophet’s illness and joined ranks with Musaylima the Liar, who propounded the lie that the Prophet had made them a partner to his Prophethood.

On the other hand, just as the Banu Asad – thinking that Prophet Muhammad and the Muslims had lost strength after the Battle of Uhud – had planned to launch a sudden attack on Madina, during the Battle of the Trench also, they joined the enemy alliance with a unit under the command of Tulayha ibn Khuwaylid. In the ninth year after the Emigration (630) however, they came to Madina with a delegation which included Tulayha, forced to give an impression that they were in fact Muslims; they asked for financial help due to the famine and requested permission to collect and distribute the alms tax among themselves. Upon their coarse attitude and behavior during these talks, their putting their own interest first, and their pretence of faith despite their refusal to believe in order to make the Prophet feel obliged towards them, verses from the Qur’anic chapter Al-Hujurat were revealed (49:14-18). Tulayha declared his prophethood during Prophet Muhammad’s illness and afterwards revolted during the Caliphate of Abu Bakr, having gained the support of individuals from Bedouin tribes including the Fazara, Thybyan, Tay’ and and ‘Abs.

An Essay on the Tradition of Forty Hadith