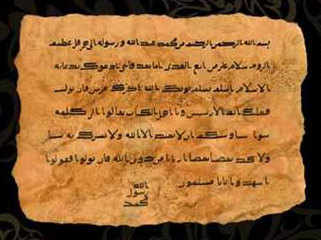 Immediately after his return from Hudabiya, Prophet Muhammad had the six letters of invitation to Islam that he had dictated to his scribes sent with emissaries to the prominent heads of state of the time (Muharram/May 628). He exerted special effort to ensure that the emissaries were well acquainted with the particular region and the people to which they were sent, possessed pleasant physical and moral attributes, and were proficient in both oration and representation. Taking into account existing norms and traditions in relation to diplomacy, the Prophet had a seal made which read “Muhammad, the Messenger of God” with which the letters were sealed.

Two of the letters were sent to the two superpowers of the day: the Byzantine and the Sassanid Empires. At the time of the emergence of Islam, the Middle East was stage to the tussle between both these powers, continuing for several centuries. Capturing Jerusalem in the year 614, the Sassanids seized the True Cross, taking it to their capital Al-Mada'in (Ctesiphon); after occupying Egypt in 619, they later crossed through Anatolia in 626, eventually reaching the steps of the city of Istanbul. Continuing their struggle against the Sassanids, the Byzantines gained ultimate victory at the end of 627 when Emperor Heraclius’ armies heavily defeated the central army of the Sassanids at the Battle of Nineveh.

The Prophet’s letter of invitation to Chosroes II (Parvez) was entrusted to 'Abd Allah ibn Hudafa al-Sahmi for delivery. Enraged by his name having been written after the name Muhammad, Chosroes tore the letter to pieces and demanded information about Prophet Muhammad from his governor in Yemen, Badhan. The Prophet was disappointed upon being informed of Chosroes’s having torn up his letter and he entreated God to punish the Persian ruler due to his impudence. Not long had passed when Governor of Yemen, Badhan sent two of his men to Madina. Having received Divine revelation that Chosroes II had been killed by his own son, Prophet Muhammad informed these emissaries of such and asked them to convey the message to Badhan that he would be left in his post of governorship in the event of his acceptance of Islam. Thereupon, Badhan together with the people of Yemen embraced Islam. As such, by means of the first Muslim Governor of Yemen, Islam began to spread in the region; sending various delegations at differing times, many Arab tribes announced their acceptance of Islam.

Dihyah ibn Khalifah al-Kalbi was appointed as emissary to Byzantine Emperor Heraclius. Serving as an example of these letters of invitation, the letter to Heraclius read as follows:

“From Muhammad, the servant of God and His Messenger, to Heraclius, the greatest of the Byzantines,

Peace be upon him who follows the guidance. I invite you to Islam. Embrace Islam and secure salvation, that God may give you a double reward. If you turn away, you will be burned with, besides your own, the sins of all those who turn away (among your people). Say: "O people of the Book. Come to a word common between us and you that we worship none but God, that we associate nothing in worship with Him, and that none of us shall take others for lords beside God. If they turn away, say: 'Bear witness that we are Muslims'"(Al-‘Imran, 3:64).”

At that time, Heraclius was in Jerusalem on pilgrimage as an expression of gratitude to God for his clear victory over the Sassanids at Nineveh after many years of war, and for the purpose of restoring the True Cross that he had gained back from the Persians to its rightful place. Heraclius received Dihya, who had come to him through the agency of the Governor of Bosra, in his presence. According to accounts, Heraclius summoned Abu Sufyan and his associates – then in Syria for trade – in order to gain detailed information about Prophet Muhammad and, learning of the Prophet’s lineage, family, environment, position in society, personality, as well as of the nature and fundamental principles of his message, he declared that these were in accordance with the characteristics of a Prophet. Not content with hosting the emissary merely according to diplomatic protocol, the Emperor sent him off with gifts.

The third letter was sent with ‘Amr ibn Umayya ad-Damri to the Negus Asham, King of Abyssinia. Having treated the Muslims who had previously emigrated to Abyssinia with kindness and rejecting the requests of the Quraysh to have them returned and taking them under his protection, the Negus responded positively to the letter of invitation and accepted Islam. He sent various gifts to the Prophet and upon the latter’s request, he sent by ship to Madina the remaining emigrants in Abyssinia along with the Prophet’s emissary.

The fourth letter was delivered by Khatib ibn Abi Balta'a to the Byzantine Empire’s Governor General of Egypt, Muqawqis (Jurayj ibn Mina). While not accepting Islam, Muqawqis welcomed the emissary and treated him with due honor. After acquiring some information  about the Prophet and the religion of Islam, he sent the emissary off with a letter of response as well as some important gifts. Among these were the two concubines Mariya and Shirin, a eunuch slave, 1,000 shekels of gold, a white steed (named Duldul), and expensive clothing and fabric. Prophet Muhammad married Mariya and Ibrahim was the child of this marriage.

The fifth letter was sent with Shuja’ ibn Wahb to the Ghassanid King, Harith ibn abi Shimr. Infuriated by such a letter having been sent to him, the ruler of Damascus threw it to the ground and threatened to attack Madina.

The sixth letter was delivered by Salit ibn ‘Amr to the chief of the Banu Hanafi in Yamama, Hawdha ibn ‘Ali, who was also known for his poetic and oratory flair. While welcoming the emissary and treating him with cordiality, he sent a letter of reply stating that he did not accept Islam.

Prophet Muhammad sent these letters with the purpose of conveying the message of Islam to many tribal leaders and sometimes even to individuals living in various parts of the Arabian Peninsula. In these letters that were succinct in style, addressees were referred to by their titles, expressions that were intimidatory or disparaging were not employed, and addressees were invited to belief in the One God and in Muhammad as His servant and Messenger. In the letters sent to tribal leaders in particular, that they would be left to rule their own lands in the event of their becoming Muslim, that their property and lives would be protected, and that some tribes would be given land, fields or mining area was specified. The need from those embracing Islam to obey God and His Messenger, perform the five daily prayers, and pay the alms tax was specifically mentioned. The letters penned after the revelation of the jizya* verses (at-Tauba, 9:29) in the ninth year after the Emigration (630), included the statement that for those Jews, Christian and Zoroastrians who did not accept Islam but recognized the sovereignty of the Muslims, jizya would be collected from them.

* The name given to the tax of protection and exemption from military service.

Thank you very much brother for such an informative writing. It helped me a lot.

Peace be with you brother, thankyou for your very interesting & informative article.
May Allah reward you in this life & in the world to come.
Allahu a'lam.

The Prophet's Behavior in Regard to its Bindingness