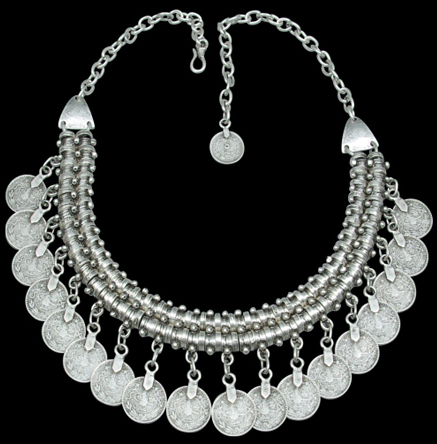 When Prophet Muhammad left Madina for the Banu Mustaliq Campaign, he took his wife ‘A’isha with him. On the return to Madina, during preparations to resume the journey after having stopped at a resting place, ‘A’isha – who had moved away from the base so as to fulfill a natural need – noticed that she had dropped the Yemeni agate necklace that her older sister or mother had given to her and retraced her steps in order to find it. Quite some time had elapsed, however, for her to find it in the dark and recover its pieces. When she finally returned to the camp, she saw that the caravan had left and, motivated by the belief that they would come back for her when they realized she was missing, she began to wait for their return. Her litter was veiled so the camel drivers had not noticed her absence. When Safwan ibn Muattal – charged with collecting what was lost or left behind caravans – controlled the campsite, he encountered ‘A’isha and taking her upon the camel, headed towards the caravan. However, as he himself was on foot and despite his fast pace, he could only catch up with the caravan mid-morning.

While initially not attracting any particular attention, this incident soon gained impact because of the rumor and scandal mongering of Abd Allah ibn Ubayy ibn Salul, the head of hypocrites, and caused great distress among the Muslims. Such was their effect, that some of the Muslims even fell into his trap of dissension. ‘A’isha, who was bedridden for up to a month upon her return, became aware of these rumors only later and when these reached her, she fell ill once again. In consideration of the Prophet’s not tending to her as he did during her former illnesses, ‘A’isha sought his permission to go to her father Abu Bakr’s house. In addition to ‘A’isha, the Prophet first and foremost, as well as Abu Bakr and his family experienced days of great sorrow and turmoil. According to her personal accounts, ‘A’isha was under the impression that the Prophet believed the slander and gossip, and with the thought that whatever she said to clear herself of these accusations would be met with suspicion, states that she had no other option but to entreat God’s help like Jacob who patiently endured all that befall his son Joseph (See Yusuf, 12:18). Divine declaration revealed some time later, beginning with the eleventh verse of the Qur’anic Chapter entitled The Light, that these accusations were none other than wicked slander, that those who made such a false accusation would be subjected to great torment and furthermore emphasized the need for Muslims to act with insight in such situations and not be instruments of gossip and suspicion (An-Nur, 24:11-19).

Prophet Muhammad read the verses proclaiming ‘A’isha’s innocence and vindicating her of the slander leveled against her to Muslims in the Prophet’s Mosque. Thereafter, those Companions who became embroiled in this slander and contributed to its spread, Hassan ibn Thabit, Mistah ibn Uthatha and Hamna bint Jahsh were condemned to punishment. According to certain accounts, the famous poet Hassan ibn Thabit participated in the slander due to existing hostility between him its other victim Safwan ibn Muattal, Mistah ibn Uthathaw was motivated by feelings of inadequacy because of constant support from his relative Abu Bakr, and Hamna bint Jahsh wanted to reduce the status of ‘A’isha in the eyes of the Prophet in order to strengthen her sister Zaynab’s position. ‘A’isha came to understand that this incident, which grieved her enormously and caused her to cry for days on end, held many wisdoms and she deemed  it– for the rest of her life –the greatest honor of her life that ten Qur’anic verses were revealed at once owing to her.

Bilal: The Pleasant Call to Islam

The Relationship of the Companions and Prophet Muhammad in the Quran

The Views of Orientalists on the Hadith Literature

Imam Abu Hanifa on Thinking Good of Your Neighbour