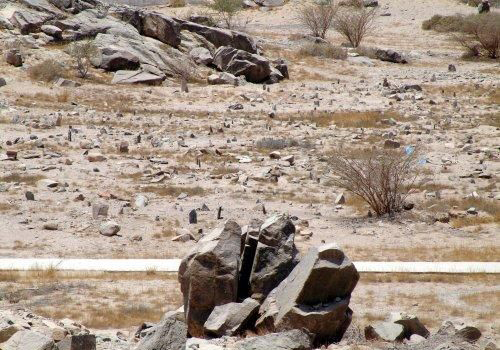 In the Makkan period, Prophet Muhammad did not act in response to the Quraysh who showed hostility to him and the Muslims, did not seek to avenge all that they had done against them, and advised patience for the Muslims subjected to insults, torture and hardship. The verses revealed in this period constantly enjoined patience. The first few years of the new era starting in Madina after the emigration, though characterized by a general atmosphere of relief also included hardship. The Makkan polytheists were determined on not giving reprieve to the Muslims in Madina. Though most of the Muslims in Madina had accepted Islam with complete sincerity, there were hypocrites among them. The Jewish tribes living in the environs of the city appeared to support the pact, but were also ready to cause problems and display behavior bordering on treason.

Shortly after the Emigration, prominent members of the Quraysh, Abu Sufyan and Ubay ibn Khalaf, in a letter that they sent the Madinan Muslims, stated that taking Prophet Muhammad under their protection and supporting him was shameful, that they needed to abandon this stance, and that if they did not, war would break out. In response to this, Ka’b ibn Malik rejected the demands of the polytheists by means of a poem that he wrote. Meanwhile, the Makkans had begun to impose certain economic measures to put pressure on Madina. News of the emigration of the Prophet and his Companions reached virtually all corners of the Arabian Peninsula. Many tribes followed the actions and responses of the new Prophet; those who were unable to emigrate or who had to hide their new Muslim faith awaited developments. In the midst of all this, the Qur’anic verse permitting Muslims suffering persecution and oppression to defend themselves with arms had been revealed: “The believers against whom war is waged are given permission to fight in response, for they have been wronged. Surely, God has full power to help them to victory – Those who have been driven from their homeland against all right, for no other reason than that they say, "Our Lord is God…" (22:39-40). Throughout a period of close to one year, starting from seven months after the emigration (1 Ramadan/March 623), the Prophet carried out military expeditions in order to protect the Muslims who sought refuge in Madina from the threat of the Quraysh and to show that the Muslims were a force unto themselves (The expedition to Sif al-Bahr led by Hamza, that led by 'Ubayda ibn Harith to Rabigh, Sa‘d ibn Abi Waqqas to Kharrar, the Abwa (Waddan) Expedition, Buwat Expedition, and the Dul Ashir Expedition.) While these expeditions travelled along the route of the Qurayshi caravans, no raids were carried out and caravans belonging to other tribes and groups were not disturbed. With these military operations, Makka and Madina were effectively at war, and the period in which rules of engagement were in force thus began, continuing until the Treaty of Hudaybiya. Seventeen months after the Emigration (2 Rajab/January 624), the expedition sent to Nakhla under the command of ‘Abd Allah ibn Jahsh attacked a Qurayshi caravan returning from Yemen, at a location to the south of Makka; one person was killed, two were taken prisoner and their belongings seized. With the expedition – which according to some accounts was conducted for the purpose of intelligence-gathering – the Prophet aimed to show the Quraysh the growing power of the Muslims.

The Battle of Badr

The Battle of Badr, alongside the Battle of Uhud and the Battle of the Trench to occur later, constitutes one of the most famous battles in the struggle that Prophet Muhammad pursued against the Makkan polytheists. Badr was a small town located 160 km southwest of Madina, 30 km from the Red Sea, at the point of intersection between the road from Makka to Madina and the Syrian caravan route. The Quraysh – to whose persecution and torture the Prophet and the Muslims were subjected for more than ten years and from whom the Muslims eventually fled leaving all but what they could carry with them – organized trade caravans to the south and north of the Arabian Peninsula, adding to their own wealth the belongings left behind by the Muslims. Prophet Muhammad received information that a large Qurayshi trade caravan led by Abu Sufyan was on its way back from Syria. It is recorded that the Makkan caravan of 1,000 camels belonging to people from all segments of Makka, had a value amounting to 50,000 dinars. Planning to attack the caravan at Badr, the Prophet set out from Madina on 12 Ramadan (09 March 624). He appointed ‘Abd Allah ibn Umm Maktum to be in charge during his absence. The Muslim army comprised 305 people, 74 Emigrants and the remaining Ansar. Mus’ab ibn ‘Umayr and Sa'd ibn Mu'adh were appointed as standard-bearers. The armed forces included seventy camels and two horses. After continuing their journey for one or two days while fasting, the Muslims broke their fast upon the Prophet’s command.

Meanwhile, Abu Sufyan learned of the Prophet’s plans when he entered the Hejaz and sent a herald to Makka in order to request reinforcements. He himself followed the coastal road, which was far from Badr and used less frequently, in order to avoid any ambush. Upon Abu Sufyan’s request for urgent assistance, the Quraysh began rigorous preparations. Later, despite learning of the caravan’s escape, they set out towards Badr with a 1000-strong force led by Abu Jahl. Their forces also included 700 camels and 100 horses.

The Prophet and his Companions were not yet aware that they Qurayshi army had left Makka and arrived in the Badr precinct. Indicating that the Badr confrontation was realized with the power and will of God, above and beyond human planning on both sides, the Qur’an states that the Muslim and Makkan forces were unaware of one another and that the trade caravan was located away from both of them, on the coastal plain (8:42).

Both forces set out for Badr in the early hours of Friday 17 Ramadan (13 March 624). The Prophet reached the water wells in Badr before the Quraysh and, upon the advice of Habbab ibn Arat, leaving only the well in nearest proximity to them in terms of the direction from which the enemy was approaching, had all the others filled with sand. However, he later allowed the polytheists to take water from the well that had been left uncovered. Prior to the battle, despite the Prophet’s sending ‘Umar – from the Adi clan of the Quraysh tribe, who served as an envoy during the Age of Ignorance – to propose to the Quraysh that they return to Makka without engaging in battle, the Quraysh insisted on combat. In accordance with ancient Arab custom, one person from each side came forward to escalate the battle and incite both sides to fight. During this challenge, known as the mubazara, Hamza killed his adversary Aswad ibn ‘Abd As’ad al-Mahzumi. Upon this, 'Utba ibn Rabi'a, his brother Shayba and son Walid from the Quraysh, and 'Ubayda ibn Harith, Hamza and ‘Ali from the Muslim forces came forward. Hamza and ‘Ali, after killing their challengers, rushed to the aid of 'Ubayda who had been severely wounded and subsequently killed ‘Utba. Due to the severe injuries he sustained during battle, 'Ubayda ibn Harith died on the way back from Badr. The battle that followed the initial challenges resulted in the certain victory of the Muslims on the afternoon of the same day. Seventy people from the Qurayshi army were killed, first and foremost Abu Jahl, the staunchest enemy of Islam and the Prophet, and seventy people were taken prisoner. Fourteen people from the Muslim army were martyred.

Leading their funeral prayers, Prophet Muhammad ordered their burial. He also ensured that the Qurayshi dead were buried. Commanding that prisoners be treated with kindness, the Prophet sentenced only two of them, 'Uqba ibn Abi Mu'ayt and Nadr ibn Harith, to death for the torture and torment they had hitherto inflicted on the Muslims. The Prophet sought the views and advice of his Companions with regards to the treatment to be shown to the remaining prisoners. Adopting the suggestion of Abu Bakr, he released the prisoners in return for a ransom ranging between 1000-4000 dirhams, in accordance with their financial means. Some prisoners were released unconditionally while those who were literate were released on the condition that they would teach ten Muslims to read and write. The spoils gained from the Quraysh were gathered and split equally between those who participated in the battle. Prophet Muhammad returned to Madina at the end of the month of Ramadan or the beginning of Shawwal.

The Prophet’s son-in-law Abu Al-'As bin Al-Rabi' was among those taken prisoner during the Battle of Badr. Married to Zaynab the eldest daughter of the Prophet, Abu Al-'As had not accepted Islam despite his wife’s being Muslim and refused to comply with polytheists’ suggestion that he divorce Zaynab. When he joined the ranks of the polytheists at Badr and was thus taken prisoner, and while the Makkans were sending their ransom money, his wife Zaynab sent a certain amount of money together with the necklace given to her by her mother Khadija as a wedding present. Recognizing the necklace, the Prophet became very emotional. Remembering Khadija and her services to Islam, he requested permission from his Companions to release Abu Al-'As and return the necklace to Zaynab. Subsequently released, Abu Al-'As returned to Makka and, in line with his promise to the Prophet, sent his wife Zaynab to Madina. When he later became Muslim and emigrated to Madina, Prophet Muhammad entrusted Zaynab to him once again. (Muharram 7/May 628).

The Qur’an states that the victory achieved at Badr was realized through the help of God and that the Muslim forces were supported by angels (Al-Anfal, 8:8-12; Al-‘Imran, 3:123-127). The Battle of Badr attracted great prestige and esteem for the Muslims across the Arabian Peninsula and allowed for the opening of significant opportunity for the Prophet in his conveying the message of Islam. Losing the Battle of Badr, the Makkans chose Abu Sufyan as successor to Abu Jahl and, swearing to seek revenge from the Muslims, began to seek ways of achieving this. In the meantime Abu Lahab, who was unable to participate in Badr due to an illness and sent ‘As ibn Hisham in his place, got worse and then died after hearing about the defeat at Badr. About two-and-a-half months after the defeat at Badr, Abu Sufyan reached Madina with a force of two-hundred men and attacked the city’s surrounding districts. He fled after killing two Muslims and setting their fields on fire. Although the Prophet set out to follow him with a contingent of two hundred men, Abu Sufyan and his men evaded them by discarding the bags of flour (sawiq) they carried with them so as to lighten their burden and move more rapidly. As a result, this pursuit came to be known as the Sawiq Campaign.

Assalam u Alikum. Many books write that Quraish reached first at badr and occupied all important position but above you have wrote that Muslims reached first, whats the correct point?