'Those With Dates at Home Won't Go Hungry' Lastprophet.info

The month of Ramadan is upon us. The display windows and street stands have now been prepared for Ramadan. The foods which will adorn the blessed iftar tables are piling up in storage rooms. The fruit which receives the most attention and is the most popular item on stands is undoubtedly the date. So much so that the date is one of the first food items which comes to mind when thinking of iftar tables. It as though our Ramadan and our fasting have become identifiable through this item.

So what is it that makes the date so important for us? Why is it that an ordinary worldly blessing has gained so much significance?

It is also reported that Prophet Muhammad, speaking to Aisha (r.a.) said, "Oh Aisha! Those who do not have dates in their homes will go hungry." (Muslim, Asriba, 5079)

We researched the place that dates have in our religious heritage as well as its medicinal functions for you.

The companion of the days of famine

Dates were a fruit that were cultivated abundantly on the lands in which the Prophet Muhammad (pbuh) lived.

It is established that during those times there were famines taking place in Arabia and people experienced difficulty in finding food. When asked how Prophet Muhammad would react to such situations, sources report that Aisha (r.a) said, "There were times when the [stove] fire would not be lit for 2-3 months." It is also reported that Prophet Muhammad, speaking to Aisha (r.a.) said, "Oh Aisha! Those who do not have dates in their homes will go hungry."

Meanwhile, it is known that the people of Quraiysh did not allow for Muslims to shop during the period of boycott against the Prophet Muhammad and his companions and there were times in which they had to survive by consuming dates alone.

A well-known expert Dr. Dowson indicates that a date and a cup of milk can provide enough energy for a person to get by on for one day.

The medicinal value of dates

Centuries following the incidents we have listed above, modern medicine discovered the miracle of dates. A well-known expert Dr. Dowson indicates that a date and a cup of milk can provide enough energy for a person to get by on for one day.

The date contains 10 elements which are indispensible for human life. Fresh dates have approximately 65 percent sugar and 2 percent protein. Furthermore, the sugar found in dates is fruit fructose, which contributes a great deal of movement and heat energy to the body and is easily broken down when consumed. Therefore, it does not give way to weight gain and is one of the best remedies of fatigue. Dates also contain Vitamin A, beta-carotene, B1, B2, B3 and B6. Scientists also point out the stress and anxiety reducing characteristics of dates. According to studies conducted by experts from Berkeley University, magnesium, containing B6, which is also known as the nerve vitamin, plays an important role in muscle movement and therefore has an effect in preventing heart attacks, is found abundantly in dates.

Dates in the Holy Qur'an

Dates are mentioned in approximately 22 verses in the Holy Qur'an. Dates are generally spoken of when describing the world and worldly blessings. "Therein is fruit and date palms, producing spathes (enclosing dates)," (Surah Ar-Rahman (55):11). 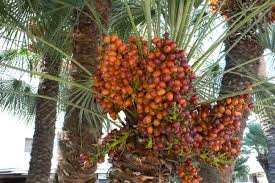 "And in the earth are tracts (diverse though) neighboring, and gardens of vines and fields sown with corn, and palm trees, growing out of single roots or otherwise; watered with the same water, yet some of them We make more excellent than others to eat. Behold, verily in these things there are Signs for those who understand!" (Surah Ar-Ra'ad (13):4).

As is evident in these verses, the date holds a special place in the depictions of the earth mentioned in the Holy Qur'an. When the eloquence of the Almighty Book is taken into consideration, it can be said that the date is a symbol and mark of the worldly blessings and the grace of Allah to his servants.

When Mary, mother of Jesus, was suffering from labor pains, dates were sent to her from Allah as a medicine; dates were what she was directed to in order to alleviate her from her suffering. This event is explained in Surah Maryam of the Holy Qur'an.

The date: the medicine of Mary

When Mary, mother of Jesus, was suffering from labor pains, dates were sent to her from Allah as a medicine; dates were what she was directed to in order to alleviate her from her suffering. This event is explained in Surah Maryam of the Holy Qur'an:

So she conceived him, and she retired with him to a remote place. And the pains of childbirth drove her to the trunk of a palm tree: she cried (in her anguish) "Ah! Would that I had died before this! Would that I had been a thing forgotten and out of sight! But (a voice) cried to her from beneath the (palm-tree): "Grieve not! For thy Lord hath provided a rivulet beneath thee; "And shake towards thyself the trunk of the palm-tree; it will let fall fresh ripe dates upon thee." So eat and drink and cool (thine) eye. And if thou dost see any man, say, 'I have vowed a fast to (Allah) Most Gracious, and this day will I enter into no talk with any human being'" (Surah Maryam (19):22-25)

Dates also have an irreplaceable symbolic meaning in Ottoman culture in the ceremony held to celebrate the night in which Prophet Muhammad graced this world. In the mawlid celebrations held in mosques for the residents of the palace, that years' Surre-i Humayun (imperial convoy or caravan) would bring the dates sent from Hijaz and offer them during the mawlid ceremony to the senior government officials.

The binominal identity of the date

The binominal name of dates is Phoenix dactylifera. It is a decorative leaved in the genus Phoenix. Similar to other fruits in the genus, it grows in tropical and warm climates. Its trunk is rough and a grayish-brown in color. Its scales are green when young; however, open up and fall off with time. Its leaves are green. The tips of the date tree's leaves frequently turn yellow. It has flowers; however, they only bloom if the weather permits and they are planted outdoors in soil.

On Seeking the Night of Destiny (Laylatul Qadr)