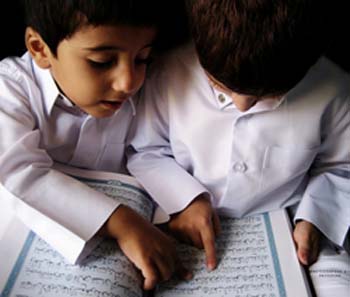 Generally speaking, people possess a great desire to have children. This is due to the innate feeling of continuing one’s own lineage, which can be found in all living creatures, as well as in every human being. Thus, attention and love towards children has become rooted in the human mind. With that being said, it is difficult to say that all people are in possession of the vigilance and awareness that is necessary for those who have children.

Childhood and adolescence, which follows soon thereafter, are the most important, critical and even most problematic phases of human life, because human beings experience physical and spiritual development, transformation and social interaction during this phase. The foundation of morality and moral training is laid during this period in addition to the foundations for a profession and a future. An adolescent who has left behind his childhood, begins to form his identity, character and personality during this period; his habits – good or bad – and knowledge acquisition, whether detrimental or beneficial all happens during this time. Similarly, hygiene, disciplined and consistent work, respect for parents, elders and the environment, patience and helping one another, love of humanity, truthfulness and justice all find a place in the human being during this period of time in life.

The final and perfected religion of Islam has counseled humanity regarding an educational system, societies, the order of values and behaviors which form the basis of interpersonal relations, alongside the universal messages which it contains. And the most perfect example for humanity, regarding matters such as an educational system and behavioral patterns is undoubtedly the carrier of this religion, the Prophet Muhammad (p.b.u.h.). Thus, the foremost duty of Muslim societies must be to understand and raise their children in line with the teachings of the Messenger of Allah so that the future generations will be able to maintain relations with him accurately. Beginning with our nation, the advantage of all Muslim nations is that they have a religion which provides solutions in every aspect of life – both humanitarian and scholarly – and they have a leader such as Prophet Muhammad (p.b.u.h.) who has lived this religion, exhibiting an exemplary role model for us through his life. When his life is examined, it is apparent that Prophet Muhammad exhibited universal behaviors that was for the whole of humanity and traveled beyond the centuries.

The protection and development of generations is one of Islam’s main goals, similar to all other celestial religions. Attaining this goal however is possible through becoming involved with all phases of a child’s life, from conception to the raising of that child, beginning at birth until marriage. The Prophet Muhammad (p.b.u.h.) advised Muslims to marry and have children. “'Four things are amongst the practices of the Prophet —bashfulness, application of perfume, miswaaq and marriage'." (1)  “Whomever among you can afford to marry, should marry. For marriage protects the eye against the unlawful. And it protects chastity at the same level.”(2)   "Marry so that I can be proud (of your numbers) on the Day of Judgment over the other nations." (3)

“O young people! Whoever among you can (afford to) marry, should marry, because it helps him lower his gaze and guard his modesty (i.e. his private parts from committing illegal sexual intercourse etc.), and whoever is not able to marry, should fast, as fasting diminishes his sexual power."(4)

After a marriage takes place and children are born, they must be watched over and raised until they marry and enter a new home. With regard to reminding us of this responsibility, the Messenger of Allah says, “ You are all shepherds and will be asked about those who are under your order,” (5)  The Messenger of Allah further praised parents who showed special care in the rearing of their children by saying, “A father has never given his child a more valuable gift than good conduct,” (6)  highlighting the significance of raising children in the best of manners.

Prophet Muhammad, who had a deep level of love and compassion for children, was involved with them by bringing himself down to their level and concerning himself with their problems. There are many narrations dealing with how he would place children on his lap and show them love and affection. Once, while the Messenger of Allah was kissing his grandchild Hussain (r.a.), and a chief of a Bedouin tribe, Aqra bin Habis said, “Do you kiss children? I have 10 children and I have never kissed one of them.” The Bedouin Arabs who had very harsh and ruthless dispositions never understood the affection the Messenger of Allah showed towards children, perceiving his attitude against children as being strange. In response to this, the Messenger of Allah would say, “No mercy will be shown to one who does not show mercy.” And again, in response to someone else who asked, “Do you kiss children? We don’t,” the Messenger of Allah said say, “What can I do if Allah has removed mercy from your heart?”

The Messenger of Allah, under the watchful eye of the people of his era, always kept children happy and exerted efforts to fulfill all of their innocent requests. Even while praying or delivering the Friday sermon, he never changed his attitude. Narrations tell us that he would arrive at prayer with his grandchild in his arms and that he would proceed to pray after putting the child down. After the child climbed up on him during prostration, he would elongate his prostration and that he even placed one of his daughters, Zaynab bin Umamah on his shoulders during prayer.

Muhammad:His Life Based on the Earliest Sources