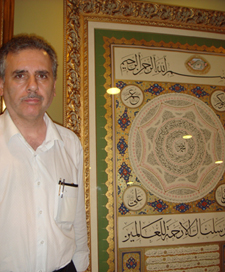 Can we begin with some information on how you began your artistic life?

This happened through the guidance of Allah. My intention was to concentrate on science and not art. However, when Allah placed such a program in front of me, I, subconsciously, leaned towards art more. I saw that there were very few people actually reflecting the knowledge and experience that we want to express through this art. I came to believe that many aspects of the Prophet Muhammad needed to be expressed through the art of Islamic calligraphy and I began working on the scientific groundwork on this topic.

Was there a specific reason why you chose Islamic calligraphy? Why calligraphy and not music, paper marbling or another art?

One of the reasons for me specifically choosing calligraphy is the guidance of Allah I always took an interest in Islamic music and this interest has always remained; however, I am lean more strongly towards calligraphy work. Cemil Meriç said, "Everyone is born with something (in hand) and I was born with a pen." I, too, was born with a pen. I can say that that the pen was the first thing I became acquainted with; when I was only four years of age I became busy with writing, without anyone steering me in that direction. I began to write and copy the writings I would see in mosques. The pen, which Allah the Almighty swore on, and allotted private time too is an absolutely indispensible part of our lives. In this regard, I believe that the choice belongs to Allah the Almighty. I believe in this. Meaning if Allah had not willed us into this direction, we would not be where we are.

You were four years of age when you began to be preoccupied with the pen. When did you start model writing?

There was the muaddhin (person who calls for prayer) of the Nuruosmaniye Mosque, Recep Efendi. May Allah have abundant mercy on his soul. I took my first lesson from him. It was a through a friend of mine, who was very content, comfortable, self-confident and wrote beautifully from the Higher Islamic Institute that I requested Recep Efendi write out lessons for me. And he was kind enough to do so. Unfortunately, I was not able to preserve those first lessons among my documents. I then took lessons from other teachers. I took lessons from Hasan Çelebi and received a certificate from Calligrapher Hamid Aytaç. The last certificate he wrote prior to his death was for me.

You have many works and projects dealing with Prophet Muhammad and the times of the Prophet. Can you first begin by your work in which you wrote all of the letters of the Prophet from the beginning in the same form and characters? How did you decide on this, how did you bring the project to life and what did you feel while writing it?

A full ten years of my life were spent in Medina Munawwara. I can say that was the happiest period in my life. And of course the main topic there is Prophet Muhammad. I traveled on that land as much as I could and I tried to study it. I began to conduct scientific research on the history of Medina. I tried to perceive the geographical structure of Medina through the resources that I had. However, when I was working on Medina, there wasn't a scaled map of the city. I applied to municipality of Medina to buy a scaled map and began my work on the basis of that map.

Furthermore, I would also like to remember Fethi Gemuhluoğlu at this point. I was never able to catch up with him. I only caught up to his funeral prayer. Gemuhluoğlu once said, ``Be friends with history and geography.`` This was his will to all of his students. This is truly a very important matter. For example, there are narratives on the life Prophet Muhammad; however, many times, there is no satisfying information that can be gathered from them. If we are going to speak of the Battles of Badr or Uhud and we have not witnessed Badr or Uhud and nor have we gone to the scene of where they took place, there isn't much that we can do. We can never go further than using terms such as they ``came, fought, faced, dispersed and everyone retrieved.`` Everything which we state will be abstract. One of your historians notes that ``I examined the land on which battles took place for five years in order tell the story of their 30 year war.`` Therefore, if we are not able to place our works on scientific grounds, our piece of art work will never reach its goal. The work will remain hanging in the air, just as words do.

Therefore, I had the chance to examine this land. I examined it as much as I could. I have not been able to gather the words in an album, however, this is one of the most important goals for me in life.

And what about the letters?

The letters are a part of this work. Among the works explaining the Messenger of Allah, I recreated the letters of Prophet Muhammad to the leaders and administrators of the time, using the same framework and writing.

Can you give us some information on the original writing, what kind of paper they were written on and how you re-wrote them?

Those letters were written on leather pieces during the time of Prophet Muhammad. Because of the wear and tear resulting from time, the colors of the letters changed and the letter sheets formed dark brown patterns. We can see this in samples in museums as well. I recreated designs that will recall this and wrote the letters on top of these.

With same kind of writing, right?

Yes, the same kind of writing, the same format and the writing of that time. We can call this early period Kufi writing. This was a time when writing had not yet taken on artistic form...

Can you give us a little bit of information on the other works you are in the midst of that are part of the ``The revival of the era of the Prophet`` ?

After returning from Medina, my spiritual and mental preoccupation with the city increased. I thought it appropriate to begin with the life of Prophet Muhammad. I created a work which contained his visit to Medina at the age of five along with his mom to visit his father, the death of his mother on his way back and the words he uttered when dying. I called this the ``Portrait of Aminah`` It was a work which contained the Prophet's childhood and his mother. The names of the Prophet Muhammad's mother and blessed woman, Baraqa Umm Ayman, were placed side by side and the words uttered by Amina to her son on her deathbed were placed in the middle.

The work dealing with the Migration to Abyssinia and the Battle of Uhud is also ready, but it hasn't been written yet. I wrote the entire Battle of Badr. I wrote the first command from Allah, ``Iqra`` (read). However, I wrote the entire verse which was revealed with that word over the silhouette of Mount Hirah. This is all I can remember at this time.

We can witness your work as being both classical and modern in terms of different styles you use. Some experts maintain a classical line, while others are continuously trying to create a modern style. You, however, have found and maintained a perfect balance between the two. To what do you owe this skill?

Sometimes you are forced to say something in a classical fashion. And sometimes you are obliged to translate something into a new understanding. If we try to tell everything in a classical perspective, we can't give much to the new generation. We must be bridges. We can only deliver our message if we become a bridge between the new and old. Not everything we say should be classical, but it should rest on a scientific basis. If a work doesn't rest on scientific basis, it will not be lasting.

Turkish Muslims placed a great deal of importance on the art of calligraphy. The main reason behind this was the thought of servicing the Holy Qur`an. They put forth a great deal of effort for calligraphy to become a lasting art that can be read comfortably and with joy. To this end, the work of Yakutì Mustasimi, a Turkish calligrapher who lived during the Abbasid era who created the first developments in this art, must be recalled. For centuries, every great expert added a new innovation and beauty to this art. It was through these continuous innovations that the art of calligraphy has reached the state it's in today.

So can it can take on different forms after today. The stage is set for changes. There is no doubt that our artists whom are talented in this realm, have the courage and can prove themselves can create innovative works. Nobody can stop this from happening. It is nobody's authority to say that a new idea cannot work. What is important is holding on to what is beautiful and right and base the works on scientific basis.

And finally, can you give us some information on the tradition of hilya (describing the internal and external aspects of our Prophet Muhammad?

Our esteemed calligrapher of the Holy Qur`an and one of our finest calligraphers, Hafidh Osman, was successful in explaining many things in the context of a mosque plan. For example, in this work, the middle area represents the dome. The four Caliphs, represent the place of the minarets. There is a "bismillah" (In the Name of Allah) at the beginning. And underneath this there is a verse that begins with explaining the Prophet; this is continued with and explanation of Ali. This is how the classical hilya was formed. Later on this became an indispensible item for the Turkish Muslim homes. The Verse of the Throne (Ayat al Kursi), speaks of Allah while the hilya, speaks of our Prophet. The verse dealing with the evil eye again speaks of our Prophet. In this respect, I took this verse within the context of hilya. I didn't stop at the classical hilya form and went on to create 30 different hilya designs, putting each one of them into application.

From A Bedouin Tent to the Byzantine Throne

Leadership of Muhammad: by John Adair, a book review

UIK Project: Our Love To The Beloved